Celebrity Portrait Artist, Maestro Igor Babailov, awarded the Ellis Island Medal of Honor, one of the nation's most prestigious awards

NASHVILLE, Tenn., May 18, 2022 /PRNewswire/ -- Maestro Igor Babailov, world-renowned American portrait artist to three Popes, world leaders, presidents and prime ministers, Fortune 500 CEOs, Noble Prize Laureates, royalty, celebrities, and distinguished individuals, was awarded the Ellis Island Medal of Honor from the Ellis Island Honors Society (EIHS) 35th Anniversary at Ellis Island on May 15, 2022, in NYC.  He was selected for his outstanding leadership and achievements in arts and culture and philanthropic and humanitarian contributions to our nation. The U.S. Senate and House of Representatives have officially recognized the Ellis Island Medals of Honor, and each year the recipients are listed in the Congressional Record. To see the full list of 2022 recipients, please visit: http://medalists.eihonors.org/. 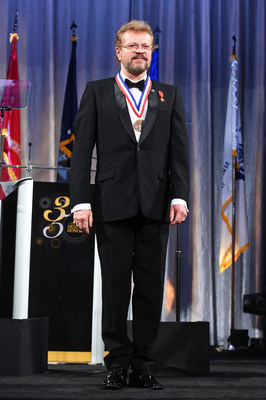 According to EIHS chairman Nasser Kazeminy, in his opening remarks: This year's distinguished medalists come from a range of industries and backgrounds. We honor them, not for where they came from, but for what they bring to our great nation. Each of them represents a thread from which the fabric of this great nation is woven. A fabric rich in color and diversity and incapable of being torn apart.

About the Ellis Island Honors Society

Since the Medal was founded in 1986, EIHS has honored distinguished and diverse Americans including eight Presidents of the United States; Nobel Prize recipient Elie Wiesel; Generals Norman Schwarzkopf and Colin Powell; Justice Ruth Bader Ginsburg, Secretaries of State Madeline Albright, Condoleezza Rice, and Hillary Clinton; Albert II, Prince of Monaco; Bob Hope; Muhammad Ali; Frank Sinatra; Rosa Parks; Mike Wallace, and Oscar-winning actress Rita Moreno and many others. The evening's event culminated with the honorees being ferried back to Manhattan with fireworks that lit up the sky over the Statue of Liberty, a tribute to the Chairman and the medalists.

Igor Babailov, Hon.RAA, KStA, MFA(PhD), D.Litt. (Hon.Causa) is a world-renowned American portraitist, Honorary Academician of the Russian Academy of Arts (est.1757) and one of the most sought-after portrait artists today. Knighted Chevalier of the Order of St. Anne, he is a Distinguished Fellow at Catholic University of America and received an Honorary Doctorate from Cumberland University.

He has painted over 2,000 commissioned portraits including Presidents, Prime Ministers, royalty and three Popes for the Vatican. His George Washington portrait hangs in Mount Vernon Museum. The Vatican Curator acknowledged Babailov as Maestro for his portrait of Pope Benedict XVI, selected by the Pope for the Vatican Splendors Museum Tour, where it hung alongside the works of Michelangelo, Giotto, Bernini, and other Renaissance Masters.  He was the only living artist in the exhibition. Other honors include the Vatican Pontifical Medal, George Washington Presidential Coin; Award for Excellence from General David Petraeus and the Joe DiMaggio Official Major League Baseball Award presented at Yankee Stadium.

Maestro Babailov's philanthropic endeavors support children's health, STEM for kids of diversity, special needs, veterans with PTSD, and other causes. He is a scholar, philosopher, master teacher, author, and is also known for his original grand-scale multi-figure masterworks such as his soon to be released humanitarian epic painting, MERCY.  His mid-south studio is in Nashville, TN.  www.Babailov.com