KANSAS CITY, Mo. — For anyone battling Parkinson’s disease, epilepsy or essential tremor, there have been a few medical interventions over the years.

One of the most common surgical interventions is deep brain stimulation surgery. Usually it’s done while the patient is wide awake, hearing everything that’s happening over the course of 4-5 hours.

Thanks to improved technology, a growing number of surgeons are learning how to do the same surgery while the patient is asleep.

Three health systems in the Kansas City area do Asleep Deep Brain Stimulation surgery. More than 1,300 metro residents have had their lives changed by it.

Brian Richards is about to join that group.

Richards recently sat at his dining room table in Olathe, still with the exception of his right hand. It’s shaking was the most obvious sign of his Parkinson’s disease. He’s one of nearly one million people in the United States with Parkinson’s.

“I heard someone explain it as a snowflake effect where it just slowly accumulates,” he continued. “You don’t notice them as a single blow, but there’s an accumulation.”

For Richards, the effect began with a small, intermittent shake to his hand. The accumulation was a shake that grew in frequency and strength. That lead to difficulty writing, using his smartphone and eventually using the computer — which meant it was difficult to do his job.

“If I didn’t have to, I wasn’t going to spend the last years of my mobility at work,” he said candidly.

Since retiring, Richards walk has become unsteady, and his voice has gotten softer. But the hallmark of Parkinson’s disease is tremors.

While some people can control the shaking symptoms with drugs, Richards wasn’t one of them. Surgery was his only option.

“I understand it is brain surgery,” Richards said at his dining room table, his hand still shaking. “But its low-risk. And at this point, I felt like if I could get rid of some of these tremors, if it helps me walk better, if it helps me smile — if I can get back some of these things, for at least a little while, I think I’ll give it a shot.”

And so, on a day in mid-May, Richards gave it a shot.

“I’m ready,” he said. “I’m just ready to get it done and see what’s on the other side. It doesn’t stop the disease — it keeps on trucking.  But if I can do without some of the more obvious symptoms, I’ll go for that.”

He was dressed in a hospital gown, laying in a hospital bed, waiting to go into surgery at Saint Luke’s on the Plaza. His wife Susan sat beside him with a bag of his clothing. Monitors making line graphs and electronic beeps surrounded the area at the head of the bed.

“I feel pretty good,” he said, “though a little nervous.”

Moments later, he and Susan said goodbye, and he was wheeled out. Susan went to the waiting room.

Over the course of a week, he underwent two separate Deep Brain Stimulation operations.

Dr. Stephen Griffith was the neurosurgeon who operated on Richards. At his office before the surgery, he sat at his desk with an easy smile and laughed.

Not everyone would say brain surgery is easy. But Griffith has done more than 300 of these surgeries. Because while DBS surgery is not unusual, what Griffith does is.

Normally, DBS surgery is done with the patient awake.

For years, surgeons couldn’t see the precise location of the surgery. Patients had to be kept awake so physicians would know what part of the brain was being operated on; patients would be asked to move their foot or finger, or blink on command. This would ensure the surgeon was operating on the right location.

Griffith is one of the first physicians in the U.S. to do asleep DBS surgery.

“You go to sleep, and when you wake up, it’s done,” he explained simply. “This operation went from taking, say, even as much as 4-5 hours to do a case with the patient awake to now, we can do a patient case in under 2 hours with the patient asleep.”

“We know that technology always wins,” he explained. “We see that in every aspect of our lives, from cell phones to our computers to our medical technology and medical innovations.  And so we now have MRI technology that is even more superior to things we had even as recently as 10 years ago.”

“Now we can clearly see the nucleus, the deep structures within the brain, where we want to place these electrodes,” Griffith continued. “Now we can use complicated technology such as neuro-navigation technology to get these electrodes to the right spot.  So we no longer need the patient to be awake. The patient can now be asleep — hence asleep deep brain stimulation.”

Griffith points out that the infection rate is also much lower. He noted that nationally, the rate of infection for awake DBS surgery is around 5%.

At St. Luke’s and other facilities doing asleep DBS, where the timeline is twice as quick, Griffith quoted a 1% infection rate.

“We know this is proven neurosurgery,” he noted.  “We know that if patients have Parkinson’s disease, or essential tremor, and they come to us for treatment, soon enough we know that once we perform surgery on them, that they have an opportunity to do better for longer.”

When we checked back in, it was almost Memorial Day weekend. More than two weeks had passed since Richards had his first surgery. At 8 a.m., in his neurologist’s office on Barry Road, Richards learned if the operations worked.

Richards was nervous and it showed. His hand was shaking more than normal.

“The tremor is kind of aggravated right now,” said Dr. Stanley Fisher as he examined his patient, gesturing to the extra eyes watching: the medical device team, the nurses and camera crew.

Fisher asked Richards to hold his hand up and completely relax. Fisher and the medical device team spent a few minutes hovering around a tablet, fine-tuning numbers and frequencies.

The neurologist again asked Richards to hold his hand straight up, then completely relax.

Fisher’s face breaks into a grin and he proudly states, “The tremors are gone.”

The tremor that plagued Richards for years vanished in seconds.

Richards looked down at his right hand and smiled. He pulled out his cell phone and typed a text — something he hasn’t been able to do easily for more than two years.

But he was cautiously optimistic.

In early June, at the same dining room table where we first met him, Richards was sitting still. All of him was still. He’s had the device implanted, and on, for two weeks.

He reflected back to that late May day in Dr. Fisher’s office.

“It just seems kind of normal,” he said. “It just seemed like as soon as he hit the switch, I didn’t have tremors. They were largely gone. It was just the most natural feeling in the world.”

The tremors can come back, and Richards’ seem to arise when he’s under stress. But the implanted device gives him the ability to regulate the frequencies and control the tremors.

But this device is only for physical tremors.

“It’s important to recognize this is not a cure for Parkinson’s disease,” Griffith said. “It is what I prefer to call it — a lifestyle improvement tool.”

“While we cannot cure Parkinson’s disease,” he added, “if we can decrease the physical effects the disease that Parkinson’s has on their lives — meaning their ability to maintain their independence, to assist in their own care, to perform their activities of daily living — then I call that a win for the patient.”

Richards considers it a win, too.

After years of struggling with using forks, and phones, and computers, losing his tremors was as simple as going to sleep … and waking up. 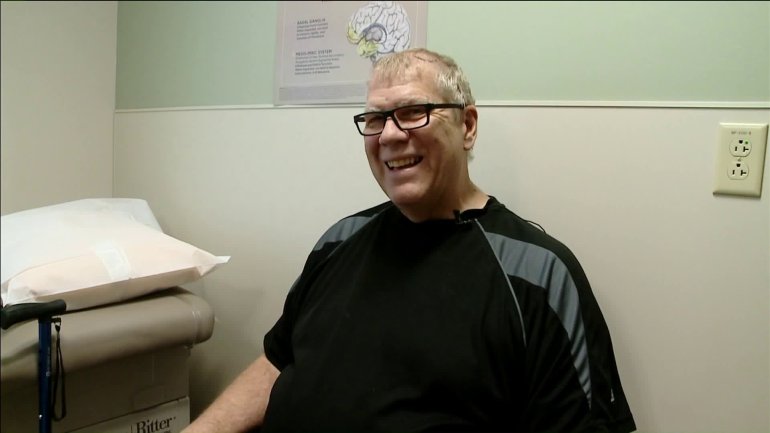 The University of Kansas Health System estimates it has done more than 1,000 DBS surgeries over the last 25 years for Parkinson’s disease and essential tremors. It recently added DBS for epilepsy to its offerings.

Children’s Mercy Hospitals also does Asleep DBS. Since 2012, the pediatric hospital has done roughly 30 DBS surgeries. A hospital spokeswoman said, “the large majority, 21, have been for dystonia. We have done two for intractable Tourette syndrome and five for tremor.”

KANSAS CITY METRO -- Thousands in the metro are now signing up to get in line for the COVID-19 vaccine. Both Missouri and Kansas signaling phase two vaccinations for those 65 and older could start as early as this week.

But the process has been heavy with a combination of anticipation and frustrations.

Struggling to sleep during the pandemic? Here’s how to combat ‘coronasomnia’

HAGERSTOWN, Md. -- Have you been having trouble sleeping since the start of the pandemic? Well you might be suffering from what experts are calling "coronasomnia."

Coronasomnia is described as the interference of sleep due to the pandemic. Insomnia specialist Dr. Lisa Medalie said things like stress from online work and school, along with decreased exercise and increased screen time are just a few factors to coronasomnia.