You’re glowing with the news: A baby is growing inside you. But as your belly swells, so does the list of bizarre things your body could suddenly do: grow hair in the wrong places, steal your memory, give you vampire breath and cause you to burp without warning. (Oh, let’s not forget the other end, too).

“Your immune system regulation is different,” Los Angeles obstetrician/gynecologist Dr. Suzanne Gilberg-Lenz said. “Your hormone levels are obviously very different. Even your oxygen consumption is different. All of those changes make a lot of weird things possible.”

Your lovely locks might never look better than during pregnancy, growing full and lush from the flush of hormones. On the flipside, you might suddenly sprout hair in places you’d rather not.

“Pubic hair can grow long and fluffy, and that freaks some women out,” Gilberg-Lenz said. “And you can see an unwelcome growth on your lips, chin and cheeks and more hair than unusual on your arms, legs, back and belly.” 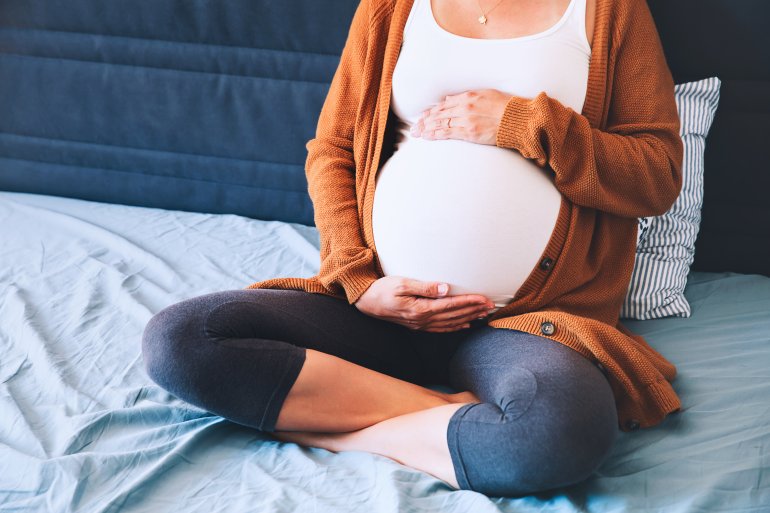 A few months after giving birth or stopping breastfeeding, that welcome/unwelcome hair will depart as your hormones go back to normal. Some women claim that they are left with permanent hair changes, such as going from curly to straight or vice versa. Unfortunately, science hasn’t been able to verify that.

A good many women, especially those with olive skin, “can get a crazy line down the middle of the belly, which can get quite dark,” Gilberg-Lenz warned.

It’s called linea negra, Latin for “black line,” and Gilberg-Lenz said it’s “basically an embryologic imprint, a memory of where your skin came together as an embryo.” It occurs when the pregnancy hormone beta hCG cross-reacts with the melatonin pigment in the skin and tends to become irritatingly visible during the second trimester.

Pigmentation changes can create more than a zipper down the middle of your belly. The skin on the face can darken into “the mask of pregnancy” called melasma; it most often occurs in the mustache area and on forehead and cheeks. The areolas around your nipples may also darken.

Don’t freak out, Atlanta dermatologist Dr. Cynthia Abbott says. The discolorations from linea negra and melasma will ultimately fade after baby arrives; until then, use caution.

“All bleaches are off limits,” Abbott said. “Stay away from salicylic acid peels, because that can enter your system and harm the baby.”

Only milk lactic acid or fruit acid peels, administered by a licensed aesthetician, are safe during pregnancy and breastfeeding, Abbott said, but “your best bet is to limit sun exposure, which only makes things worse.”

Increased pigmentation can also darken moles on your body, so check with your dermatologist to be sure they aren’t signs of a very dangerous form of skin cancer called melanoma.

Another downer: Acne can return during pregnancy due to hormones stimulating an increase of oil in the skin. Don’t use tretinoin or Retin-A, Abbott said. That popular acne/wrinkle treatment is now added to many over-the-counter products, so check the labels of your beauty products.

“Less is more,” Abbott said. “Come off of everything you can.”

The truth about stretch marks

Stretch marks are one of the most common and unwelcome skin changes that can happen during pregnancy. There’s a genetic component: If your momma had them, there’s a good chance you will too.

“It’s a hormonal genetic predisposition,” Abbott said, “and people hate to hear that. Your best bet is to keep your skin moisturized, because dry skin can make them worse, but it’s probably going to happen anyway.”

Abbott suggested using basic moisturizers that have as few ingredients as possible to avoid any skin irritation or rashes. In fact, she warned that you might become allergic to creams you’ve used for years.

“You are hypersensitive as a pregnant woman,” Abbott said. “There’s an increased risk for contact and allergic dermatitis and psoriasis. If you had problems with psoriasis prior to getting pregnant, that will probably pop up during the pregnancy. If you shake hands with someone who has a wart, you’re more likely to get the wart when you’re pregnant.”

PUPPS (and not the cute, furry kind)

There’s one sort of skin rash that is much more serious: pruritic urticarial papules and plaques of pregnancy, or PUPPS. It often starts in the third trimester with tiny itchy bumps on the trunk or breasts that coalesce into a bigger rash. It might spread to the thighs and upper arms.

Although it’s not dangerous, PUPPS “could make you go insane,” Gilberg-Lenz said. “It’s incredibly itchy, just awful. Women will be up all night itching, and there’s nothing to do about it but anti-itch cream. And it’s not going to go away until you deliver, and in fact, it often flares after delivery and takes another six weeks to subside.”

Some of the home remedies for PUPPS include oatmeal or baking soda baths, cold compresses, aloe vera gel after bathing and, if you can’t keep yourself from scratching, soft cotton gloves.

If you’re unlucky enough to be one of the one in 200 or so pregnant women who get PUPPS, there is some good news: It’s unlikely to recur in subsequent pregnancies.

“Blue” vagina? Yes, you read that right. The vagina, cervix and vulva, which are the lips around the vagina, can take on a bluish cast in early pregnancy due to increased blood flow to the area.

“If women are looking closely, they can often pick that up themselves between six and eight weeks of their pregnancy,” Atlanta ob/gyn Dr. Katherine Babaliaros said. “Oftentimes it’s a partner that’s like, ‘This looks really funny; something’s going on.’ ”

Just like varicose veins in the legs, pressure from the baby can also cause veins in the vaginal area to swell and become visible. The problem often gets worse as baby gets bigger. The treatment?

“There’s all these crazy devices online,” Gilberg-Lenz said. “You can buy what’s basically a jock strap for girls, which is helpful because you need counterpressure to keep the swelling down. Just imagine if you had a hemorrhoid in your vagina. It’s so painful.”

Speaking of hemorrhoids, they are created by the same increase in blood flow that causes varicose veins in the vagina and the legs. Constipation and pushing just makes them worse.

Hemorrhoids may be more of an issue in the second or later pregnancies, Gilberg-Lenz said, because “the pump has been primed.” She suggests fiber, fluids, stool softeners and magnesium.

Feet can swell from fluid retention and weight gain, but they can also grow in length. Many women are shocked to find their shoe size increased after delivery.

“You make hormones that allow your joints to become lax during pregnancy to help the pelvis accommodate the baby and allow you to deliver,” Babaliaros said. “But it also causes the arches of your feet to fall and the foot to lengthen between 2 and 10 millimeters.”

“Unfortunately, people’s arches don’t come back after pregnancy,” Babaliaros said. “Other than wearing shoes with good arch support, there’s nothing you can do about the sort of laxity and spreading of the bones.”

Joint laxity and blood flow can surprise you in other ways, too. Your teeth might shift — and they will certainly be more sensitive. So are gums, which can swell or bleed after brushing. Having good dental care during pregnancy is a must, as these changes make you much more susceptible to gum decay or gingivitis.

Oh, and if you didn’t know, gingivitis equals terrible breath.

Flatulence and other unmentionables

Breaking wind when you had no idea you were about to is one of the unfortunate realities of pregnancy. You can blame that, Babaliaros said, on a one-two punch from the hormones progesterone and relaxin.

She says the combo is designed to prevent the uterus from contracting when it’s not supposed to, “but it also can loosen the sphincter muscle around your gas exit, making it harder to control your flatulence.”

Those hormones also relax the lower escophageal sphincter in your stomach, causing the heartburn that plagues many women during pregnancy. Add to that the pressure of the growing baby, which slows digestion, and you have a recipe for bloating and burping. How musical!

Last but certainly not least in the unmentionable category: an increase in vaginal discharge.

“A lot of women complain, telling me: ‘Oh, my gosh, the vaginal discharge is incredible!’ ” Babaliaro saids, adding that it’s completely normal in pregnancy because of the increase in blood flow. “It’s harmless unless there’s irritation, turns yellow or green, or has a strange odor, in which case it needs to be checked out by your doctor.”

Body changes during pregnancy might be unpleasant, but ask any mom cooing over her newborn: It’s totally worth it. Until that baby comes to lift your spirits, experts suggest reaching out to doctors and other moms for support.

“We probably don’t see the number of pregnant women that we should,” said Abbott, the Atlanta dermatologist, “because they have problems and postpone getting treatment until after delivery. Don’t wait. Get help.”

WASHINGTON — The Nationals and Yankees knelt in unison before the first game of the baseball season as part of an opening day ceremony Thursday night that featured references to the Black Lives Matter movement, the coronavirus pandemic -- including an off-the-mark first pitch by Dr. Anthony Fauci -- and the home team’s 2019 championship.

Players from both clubs wore T-shirts saying Black Lives Matter during batting practice, and the letters “BLM” were stenciled into the back of the mound at the center of the diamond.

The superintendent said it's a necessary pause amid the rapid rise of COVID-19 cases and the health department's concerns about holding in-person classes.

KANSAS CITY, Mo. -- RideKC announced Monday that they have suspended fares on all buses due to the impact of COVID-19. The company said if fares are reinstated later this year, they will give customers 30 days notice to purchase passes, which are currently not available. During the pandemic, RideKC is operating reduced schedules. Due to staffing issues they say there may be significant delays. As part of the city's…

‘Too many are selfish’: US nears 5 million virus cases

At least 50 killed, hundreds hurt in massive blast in Beirut