It’s Sunday morning, and you open your eyes to discover it’s still incredibly early because — huzzah! — we’ve reached the end of the seasonal practice known as Daylight Saving Time.

Do you: A) Immediately roll over and go back to sleep? or B) Tell yourself that you shouldn’t be lazy, and get up to make the most of this “extra” hour?

It’s a trick question, because there isn’t a perfectly right answer that would be the same for everyone. 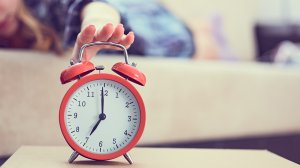 But in general, experts say, most should use the fall time change to squeeze in more sleep — and with zero guilt about doing so.

“We live in a society where the CDC considers sleep deprivation to be a public health epidemic,” said Dr. Nate Watson, a professor of neurology at the University of Washington School of Medicine and co-director of the school’s sleep center.

“Easily a third of individuals are not getting the recommended seven or more hours of sleep on a nightly basis, which is necessary to support optimal health. So taking that into consideration, I would recommend that people use that hour [from the time change] to get additional sleep.”

This is particularly true for those who skimp on sleep during the workweek, added Dr. Phyllis Zee, the chief of sleep medicine at Northwestern University’s Feinberg School of Medicine.

“For most people,” she said, “it’s a good idea to get an extra hour of sleep because sleep is important for memory, appetite, mood, immune and cardiovascular functions.”

Our day will appear to be longer on November 3 because of the rules of the Daylight Saving Time system, which was developed more than 100 years ago and formally adopted in the US in 1966.

The goal was to reduce our electricity use by extending the number of hours we have daylight. And while it’s unclear whether DST actually helps conserve energy, much of the US — except for Hawaii and most of Arizona — continues to follow the practice.

At 2 a.m. on the second Sunday in March, those observing DST move their clocks ahead by one hour. And then, at 2 a.m. on the first Sunday in November, the clocks are moved back an hour — creating the appearance of a magical “extra” 60 minutes.

This annual tradition has its critics, and there have been efforts to pick one time and stay there year-round.

Yet doctors will tell you that DST isn’t just annoying; it can be harmful to our health. “When we do go to daylight saving time, sleep is disrupted; it’s shortened and it’s less efficient,” Watson said. “The incidence of myocardial infarctions increases by up to 29%, the ischemic stroke increases by 8% following DST time-related changes, and then mental health is also impaired.”

After all, experts say, the human body has its own internal clock, one that’s already wired to help the body sleep when it’s dark out and be awake when it’s not. Trying to adjust to Daylight Saving Time can throw off this internal response.

“When we ‘fall back’ it’s a time to celebrate because we go back to Standard Time, which is where I believe we should stay year-round,” Watson continued. “And the reason why is because when we’re in Standard Time, the sun clock and our body clock are in better alignment.”

Set yourself up for sleep success

Ironically, though, there’s little evidence that people actually take advantage of the return to Standard Time to get more Z’s, as a 2013 UK study found.

A likely reason is that instead of sleeping in “we take the opportunity to go to bed later,” Zee said. “Our modern environment is very tempting — to do more, to use social media — at the expense of prioritizing sleep.”

Dr. Till Roenneberg, a professor of chronobiology at Ludwig-Maximilian University in Germany, agrees, calling sleep one of the most underestimated functions in biology — perhaps particularly for Americans, who tend to have a “bad conscience” when they’re not active, he said.

“We need sleep to be optimally awake, and we cut into our sleep all the time. But sleep doesn’t take away from wake; it makes wake possible,” Roenneberg continued.

“When you sleep, you are much more efficient. The bad thing about losing sleep is that you [then] need more time to accomplish things, and you get into a vicious cycle because you’re not effective.”

So as you’re planning your weekend, consider including a little more sleep while your clocks are all time traveling, anyway — even if you don’t aim for the full hour.

Another option is to slowly acclimate yourself to the time change by adjusting your usual wake-up time in 10 to 20-minute increments, said Dr. Brian Isaacson, the associate chairman of the department of psychiatry and program director of the psychiatry residency at AtlantiCare.

You can also optimize your environment for better sleep by doing things like:

And if you’re thinking to yourself that snoozing for an extra hour or not couldn’t possibly make a difference to your health, you’re underestimating sleep again.

“Even sleeping 15 minutes less than your sleep need on a chronic basis can result in sleep debt that will affect your performance and health,” Dr. Watson said. “So these smaller amounts of sleep are more important than perhaps we think they are.”

WASHINGTON — The Nationals and Yankees knelt in unison before the first game of the baseball season as part of an opening day ceremony Thursday night that featured references to the Black Lives Matter movement, the coronavirus pandemic -- including an off-the-mark first pitch by Dr. Anthony Fauci -- and the home team’s 2019 championship.

Players from both clubs wore T-shirts saying Black Lives Matter during batting practice, and the letters “BLM” were stenciled into the back of the mound at the center of the diamond.

The superintendent said it's a necessary pause amid the rapid rise of COVID-19 cases and the health department's concerns about holding in-person classes.

KANSAS CITY, Mo. -- RideKC announced Monday that they have suspended fares on all buses due to the impact of COVID-19. The company said if fares are reinstated later this year, they will give customers 30 days notice to purchase passes, which are currently not available. During the pandemic, RideKC is operating reduced schedules. Due to staffing issues they say there may be significant delays. As part of the city's…