The second presidential debate airs Sunday night on FOX 4, and as the topic of politics seems to be everywhere, from round-the-clock TV commercials, to social media, to late night comedians, to yard signs and bumper stickers, many parents are wondering how the political landscape is affecting our children.

FOX 4 invited Christa Melnyk Hines, author of several books on parenthood in today’s world as well as a popular blog on “creating meaningful relationships in the digital age” to come and answer some questions many parents no doubt have about their kids and politics.

So, with Sunday night’s presidential debate, should the kids be watching?

“I think they should, why not?” Christa says. “You know kids are, by nature, they’re curious. They want to know what’s going on, and I know as a mom, there are moments when I want to cover their ears, but you know what? We have to tap that curiosity and really engage them. Ask them open-ended questions. Play the devil’s advocate. Push back a little bit. Listen to what they’re saying. They’re coming home from school every day with different things that they’ve overheard, so you know, why not get them involved and talk about those issues that matter?”

With so much information at our fingertips, Christa says it’s more important now than ever to teach them to think for themselves.

“It’s a matter of teaching them to be critical thinkers, to think about things from different sides of the coin, not just one way of thinking about things because is black and white in life, as we all know, so you know, definitely get them talking about it, and listen. Listen to what they have to say. Some of the things they say may really surprise you.”

With politics being often a very ugly business, and it’s no secret that both major candidates have notably low approval ratings, Christa says it’s important to teach kids that there is a positive side to politics or watching the debates.

“You can really encourage respectful dialogue. What we’re watching are two candidates that are doing anything in their power to crush each other. Real life doesn’t work that way. You know, what we’re doing is wanting to build relationships and connect with people, and sometimes that means learning to agree to disagree. It means tolerating other people’s views.”

Christa said the political mudslinging can be an example of what not to do.

“You solve conflict. Kids do it every day on the playground. They decide how their going to solve conflicts and we need to keep encouraging them to treat other people with dignity and respect.”

Even in divided households, where dad might lean one way and mom leans another, parents can still let kids think for themselves and make up their own minds, and to be civil about disagreements.

“I think you have to be very conscious about it. I think you have to decide, you know, we’re not going to be throwing insults at each other if we’re going to discuss this. I think it can really raise the anxiety level for kids,” she says. “If it gets too emotional at some point you have to at some point say, ‘let’s agree to disagree and maybe come back to this later.’ I think those are all positive ways. What we don’t want to do is raise the anxiety level of our kids, but also model to them that it’s okay to disagree, that we can still love each other and have, you know, differing opinions. There’s nothing wrong with that.”

You and your kids can watch the second presidential debate on FOX 4 tonight at 8 p.m., where our own John Holt will be in attendance and will have a live recap at FOX 4 News at 9. 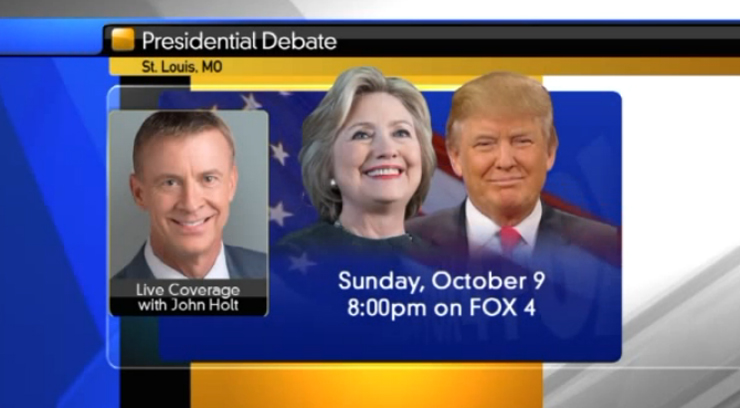