KANSAS CITY, Mo. — Spring is right around the corner and that means we’re almost out of hibernation season. For many, winter keeps them homebound, doing minimal activity besides work and school, and catching up on the Netflix queue. Now that the weather is finally warming up, you might be considering what to do outside or what places to visit.

Spring is an excellent time to explore and view art in Kansas City. Art helps you expand your horizons and gives you new perspective, which can be therapeutic if you’ve been cooped up at home for the last few months. The following list has 10 important artworks or exhibits worth seeing this year.

(1) Water Lilies: The Nelson-Atkins Museum of Art houses more than 40,000 pieces of art. One of the more stunning paintings is one of Claude Monet’s “Water Lilies.” The artist painted around 250 oil paintings for his Water Lilies series. The paintings depict his flower garden at his home in Giverny. Monet painted several of the pieces while suffering from cataracts. The paintings from this series are on display at museums all over the world. Seeing the painting at the museum is an entirely different experience than coming across an image of it on the Internet. The detail Monet put into his artwork has a magical feel to it — the colors seem to move and wind seems to rustle grass. Water Lilies are one of the most iconic images of impressionism — a 19th century art moment characterized by relatively small, thin, yet visible brush strokes, accurate depictions of lighting, and other aesthetics. Monet wanted to document the French countryside. He deliberately painted the same scenes many times in order to capture new lighting and the passing of seasons. 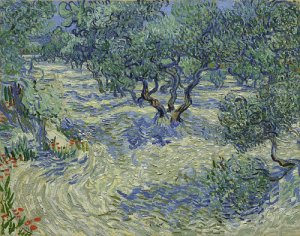 (2) Olive Trees: nearby the Water Lilies painting, you’ll find one of Vincent van Gogh’s paintings from the “Olive Trees” series. Back in 2017, the museum discovered a small grasshopper embedded in the thick paint of the piece. Researchers discovered it while cataloging the French painting collection at Nelson-Atkins. Van Gogh frequently worked on his art outside, and he often dealt with the natural elements while he painted. This includes wind, dust, grass, trees, flies, and grasshoppers. Curators, conservators, and outside scientists added scholarship on 104 French paintings and pastels at the museum as part of its research project. The online catalogue will be published in installments in 2019 and will offer a wide range of insight about the artwork. Using magnification techniques, Paintings Conservator Mary Schafer discovered the tiny grasshopper hidden in the painting. The insect sits in the lower foreground of the landscape. Visitors cannot see it without some kind of magnification.

(3) Art from Thomas Hart Benton: Thomas Hart Benton was an American painter and muralist. He was born in Neosho, Missouri to an influential family full of politicians. His father, Colonel Maecenas Benton, was a lawyer and he was elected four times as U.S. Congressman. The painter was named after his great-uncle, one of the first two United States Senators elected from Missouri. As a teenager, Benton worked as a cartoonist for the Joplin American newspaper. He spent time in Chicago, Paris, New York City, and other places before settling in Kansas City. He taught at the Kansas City Art Institute. Benton’s paintings often centered around small-town life and the working class. He has several paintings located at the Nelson-Atkins Museum of Art.

In 1977, Missouri designated Thomas Hart Benton’s home and studio as a state historic site. The state preserved the way his house was following his death. His clothing, furniture, and paint brushes haven’t moved since his passing. The house museum is open for guided tours and displays 13 original artworks.

(4) Julie Blackmon’s Work at the Kemper: Julie Blackmon lives in Springfield, Missouri and is known for her photography. If you’ve never seen her work, it is some of the more delightful art of our time. Kemper Museum of Contemporary Art is holding an exhibit called “Child’s Play: An Exploration of Adolescence.” It includes some of Blackmon’s works. Her photography shows real and imagined aspects of her family life. The exhibit as a whole focuses on concepts brought forth by neurologist and founder of psychoanalysis, Sigmund Freud. The exhibit will run till August 4, 2019. It also includes works from Arthur Tress and Kojo Griffin.

(5) Art Alley: Hidden away in Kansas City is a magical world of street art and graffiti. Art Alley is located near 17th & Locust. The ever-evolving hub brings together some of the area’s most talented graffiti wizards. The art in the old business district includes popular characters like Mega Man, Waldo, and Wolverine. It also has plenty of unknown characters — like the image of the woman in this article with the elongated ears, Victorian dress in a teal-like shade, and a moon ridden with craters. The murals are spread out across several blocks. People recommend parking your car and exploring the area by foot. It’s also a hot spot for Instagram worthy snaps.

(6) Disney’s Old Art Studio: Walt Disney had roots in Kansas city and in nearby Marceline, Missouri. It’s worth taking a day trip to his old stomping grounds to check out the Walt Disney Hometown Museum. Disney founded his first professional film studio in Kansas City. The business operated on the second floor of a building near 31st & Troost. There is some art outside the building in memory of Disney and his quest to deliver top notch animations. This is a work in progress, so don’t expect to be amazed. Right now the “Thank You Walt Disney, Inc.” is committed to saving Walt Disney’s KC history to provide a place for art and animation study. There is an effort to restore the Laugh-O-Gram Studio for future generations.

(7) Expedition to the ChimaCloud: the immersive, multimedia experience created for the Nelson-Atkins gives viewers a one of a kind experience. It incorporates technology, identity, ceremonial rituals, and science fiction. Saya Woolfalk’s body of work takes visitors into a fantastical, made-up world. The unique exhibit will stay up through September 1, 2019. The artist will talk about her work May 9th and tickets will be required. The exhibition includes other activities listed on the Nelson-Atkins website. If you’re needing a little more context for this exhibit, the museum describes ChimaCloud as essentially an alternative digital universe created by the Empathics, a fictional race of women.

(8) Monarchs: Brown and Native Contemporary Artists in the Path of the Butterfly: the traveling exhibition allows visitors to explore ideas around the defense of Standing Rock and the possibility of a border wall in the near future. The exhibit looks at how the wall presents challenges to people native to the Americas who have been separated into categories of indigenous, immigrant, and assimilated Americans. 42 artists pull from ancestral and cultural memory to take a deeper look at the abstract ways we determine cultural identity. The exhibit also explores centuries-old trade routes that move people along with their goods.

This exhibition is curated by Risa Puleo. It is organized by Bemis Center for Contemporary Arts, Omaha, Nebraska, where it was first presented in December 7, 2017, to February 24, 2018.

(9) History Reimagined at 21c Kansas City: a viewing of contemporary art here could also come with a hotel stay and some fine dining. There are guided museum tours every Wednesday and Friday at 5. It is free and open to the public 365 days of the year. 21c also has locations in other American cities. There are three temporary exhibits up right now. The museum is home to Sky Blue Penguin figurines. The birds are scattered around the museum to accompany visitors on their journey. According to the museum’s website, the sky blue color is significant to both art and science. The website quotes writer Rebecca Soinit in selecting the specific color for the KC museum:

“Light at the blue end of the spectrum does not travel the whole distance from the sun to us. It disperses among the molecules of the air, it scatters in water. Water is colorless, shallow water appears to be the color of whatever lies underneath it, but deep water is full of this scattered light, the purer the water the deeper the blue. The sky is blue for the same reason….This light that does not touch us, does not travel the whole distance, the light that gets lost, gives us the beauty of the world, so much of which is in the color blue.”

(10) Panthéon de la Guerre: the mural was the most ambitious artistic undertaking during World War I. The sprawling painting was completed in 1918. At 402 feet in circumference and 45 feet in height, it was the largest painting in the world.

Artist and museum worker Daniel MacMorris found out the painting was in the United States from a 1953 Life magazine article. After MacMorris acquired it, the painting was cut into puzzle pieces to fit the remaining wall in Memory Hall at the Liberty Memorial. MacMorris said the effort compared to “whittling down a novel to Reader’s Digest condensation.” He repainted many figures and other elements to help unify the work after condensing it. He left several fragments in the National WWI Museum and Memorial’s archives. Portions have not been seen in public since the Panthéon’s last full exhibition in 1940. MacMorris did throw away several pieces that were not used for the painting. He died in 1981.

Woman visiting son in Missouri prison is locked in …