TARBORO, N.C. — Parents in North Carolina are seeking answers after they say their 10-year-old son was punished by his teacher for saying “ma’am.”

The boy’s parents argue that word is an appropriate term for respecting one’s elders, but the boy’s teacher apparently didn’t agree, WTVD reports.

Less than two weeks into a school year may seem soon for a parent to request their student be moved out of the classroom. But that’s exactly what Tamarion Wilson’s mother did.

When the 10-year-old North Carolina boy came home from school Tuesday afternoon, his mom noticed something off.

“I asked him what happened,” Tamarion’s mother Teretha Wilson said. “He said he got in trouble for saying ‘yes ma’am.'”

Confused by his response, Tamarion then pulled out this sheet of paper, where he was made to write the word “ma’am” four times per line on both sides — all because he referred to his teacher as such when she instructed him not to. 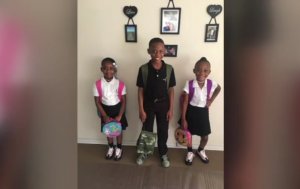 “He had a look on his face of disappointment, shame,” Tamarion’s father McArthur Bryant said.

Tamarion’s parents explained he was recently hospitalized for hallucinations and memory issues, something the teacher did not know. Still, they say that’s no excuse for how she handled the situation.

“At the end of the day as a father, you feel kind of responsible for that. Knowing that I have been raising him and doing the best that I can, it’s not acceptable,” Bryant said.

When Wilson returned the signed punishment sheet to the principal, she included an extra piece of paper, where Tamarion wrote down the definition of the world “ma’am.”

Wilson said the teacher told Tamarion during the encounter that if she had something, she would have thrown it at him.

During a meeting Wednesday between Teretha, the teacher and principal, Teretha said the teacher acknowledged saying that but added she was not serious. Following the meeting, she requested her son change classrooms, which the principal agreed to do.

In a statement about the handling of the situation, a school official told ABC11, “This is a personnel matter which has been handled appropriately by the K-7 principal.”