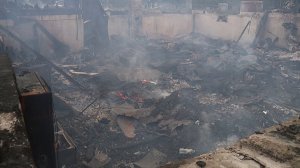 The 135-year-old church  burned to the ground. A neighbor and church member saw the church already in a ball of flames before 2 a.m.

There was nothing firefighters from the Johnson County Fire District and Odessa hauling in water could do.

It’s a big loss for the community, including the Pemberton family.

Donald Pemberton’s great grandfather’s name was on the church, he’s buried in the cemetery next to it. The 81-year-old was married to his wife Peggy there 61 years ago, as were his daughters. 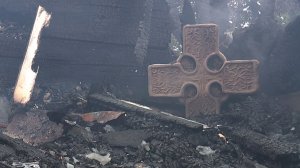 “The Pembertons have been involved in Woods Chapel for a long time and it kind of makes you sick when you look at the smoke coming out of the basement,” Donald Pemberton said.

That smoke continued to billow from the church’s ashes hours after firefighters left. Church elders met Thursday night to start talking about the church’s future.

“I’m sure there would be no way we could rebuild what was there in our day,” Pemberton said.

ATF, The Missouri State Fire Marshal’s Office and Johnson County Sheriff’s Office are all involved in the investigation. They haven’t ruled out lightning, but early indications are the storms didn’t hit that area until after the fire started.

Woods Chapel United Methodist Church established in 1884 in Odessa, MO burned to the ground this morning. Chief tells me lightning is a possibility, but not necessarily the cause. ATF, Sheriff’s also investigating. pic.twitter.com/WFfcbVOkUX

The Pemberton family has a long history at the Odessa church that burned, several relatives buried next to the still smoldering ashes, the couple was married there 61 years ago. Details tonight on FOX4 as they decide where to go from here. pic.twitter.com/kM4jXW80QS

OVERLAND PARK, Kan. -- Just days away from the scheduled start of football practice in Johnson County, it looks like most schools won’t have players in pads.

Some players and their parents aren’t happy about it.

KANSAS CITY, Mo. – The mother of a 4-year-old boy murdered while sleeping in June is calling on the community to take a stand against gun violence.

Charron Powell and her family breathed a sigh of relief, as the suspect in the death of her son, LeGend Taliferro, was charged and taken into custody Thursday morning.

Facebook beefs up anti-misinfo efforts ahead of US election