INDEPENDENCE, Mo. -- It’s not exactly a holy war, but there’s a small piece of land in Jackson County that means everything to millions of people worldwide.

Several different religions believe the Second Coming of Jesus will happen in Independence, Missouri. And to this day, three different churches surround that sacred soil.

It could be seen as a kind of peaceful standoff, preparing for the end times. But it hasn’t always been peaceful.

The small piece of land, known as "Temple Lot," is a reminder of some of the darkest and bloodiest days in Missouri’s history.

“This is a sacred place. This is -- in the last days, this will be a sacred place and Jesus will come here,” said Greg Brim, a member of the Church of Jesus Christ of Latter Day Saints.

Brim visited Temple Lot in Independence with a group of friends and family recently.

“This is going to be the place, yeah,” Brim said.

The belief dates back to a revelation from Joseph Smith, the founder of the Church of Jesus Christ of Latter Days Saints, in 1831.

Smith told his followers that a divine revelation instructed him to prepare a New Jerusalem, a City of Zion, on this small patch of land near present day downtown Independence.

“And this is what they wanted. This is what’s called the Temple Lot right here,” said Randy Sheldon, an elder with the Church of Christ Temple Lot.

In 1831, Joseph Smith laid guide stones in the ground here, markers for a temple where Jesus would return.

This Temple Lot was only the beginning of Smith’s plans.

“It’s an important place to us because Joseph Smith prophesized that temples would be built here someday, and we still believe it,” Brim said.

Smith platted out an elaborate city with a tabernacle and dozens of streets and buildings to prepare for the second coming of Jesus.

But a bloody confrontation cut those plans short.

“If you stayed in Missouri, they cut you up and threw you down the well,” Randy Sheldon said. “Tarred and feathered you and hung you buy a meat hook somewhere.”

Hostilities between the Latter Day Saints and their Missouri neighbors ignited the Missouri Mormon War in 1838.

“We had 17 or 18 men and boys massacred in northern Missouri,” Mackay said. “Something called the ‘extermination order.' Leave the state or you’ll be exterminated.”

Joseph Smith and 10,000 of his followers fled Missouri. The so-called ‘Extermination Order’ on Latter Day Saints in Missouri (officially titled ‘Missouri Executive Order 44’) was enacted during the Missouri Mormon War in 1838 and wasn’t officially rescinded until 1976.

In 1844, an angry mob in Illinois killed Joseph Smith. After his death, the Latter Day Saints movement splintered into several different belief groups.

“It wasn’t what I call a happy family,” Sheldon said.

The first group to return to Independence in the late 1800s was the Church of Christ Temple Lot. They're followers of the Book of Mormon but separate from the larger Church of Jesus Christ Latter Day Saints.

In the late 1800s, the smaller Church of Christ Temple Lot bought the sacred land where so many believe Jesus will return. It's owned it ever since.

“There has been numerous times that people of tried to take it, and they can’t get it,” Sheldon said.

The marker stones Joseph Smith laid for the temple sit inside the Church of Christ Temple Lot visitor’s center.

Over time, followers of the larger, more well-known Church of Jesus Christ of Latter Day Saints returned to Independence and set up a sprawling visitor’s center on land bordering the sacred Temple Lot soil.

In addition, a third religion also with roots in the Book of Mormon, the Community of Christ, erected its towering world headquarters, literally across the street and overlooking the Temple Lot.

When seen from above, it’s clear all three faith traditions are staking a claim to be on or near the Temple Lot for the time when, they all believe, Jesus Christ will come to Independence.

Of the three churches surrounding Temple Lot, the Community of Christ is the only one that has moved away from the belief that Jesus is literally returning to this place, shifting to a more symbolic notion of the second coming.

But the Latter Day Saints and Church of Christ Temple Lot are very much preparing for a literal, physical second coming.

But the Latter Day Saints, with 16 million members worldwide, don't own the Temple Lot land -- at least, not now.

“As we would say, in the Lord’s time everything will work out, according to what the Lord would have us do,” said Jeremiah Morgan, president with the Liberty Latter Day Saints stake.

The smaller 6,000-member Church of Christ Temple Lot claims there have been offers to buy the sacred spot. 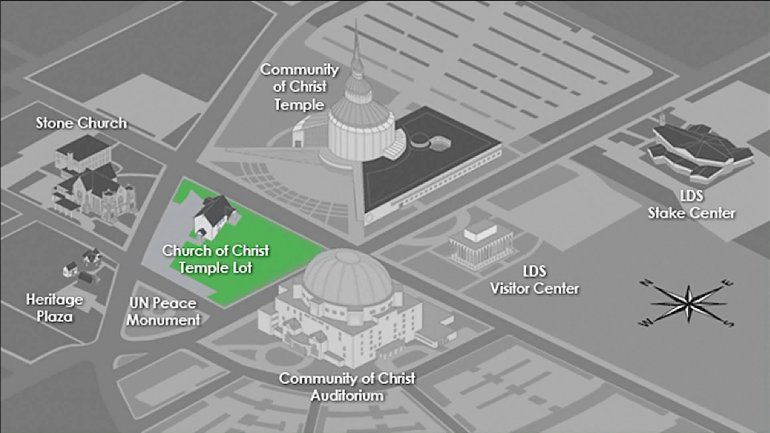 Sheldon, a Temple Lot elder, sees himself as a keeper of the flame to Joseph Smith’s revelation.

“There’s a gathering of forces, gathering of armies and so forth like this. But they’re taking on God,” Sheldon said.

And if it seems like Sheldon sounds like he’s on guard, there’s valid reason for him to feel that way.

In 1990, a former Temple Lot member burned their church to the ground.

Sheldon keeps close watch over the Temple Lot because he knows many others are, too.

When asked by FOX4, elders with the Church of Jesus Christ of Latter Day Saints said they're not trying to acquire the Temple Lot ground.

But Sheldon said there have been inquiries, as recently as this year.

He insists it’s not for sale and lives each day keeping his mind ready for the second coming of Jesus Christ, right here in Independence.

And Sheldon is firm on the question of whether his church would ever sell the Temple Lot ground to the larger Church of Jesus Christ of Latter Day Saints.

“It ain’t happening. Never will happen.”