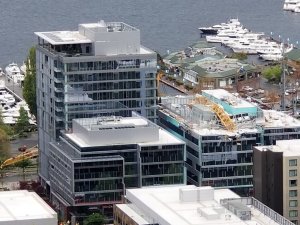 The four were dead by the time firefighters got to the scene, Fire Chief Harold Scoggins said. Three people — including a mother and her baby — were transported to the hospital, he said. A fourth person was injured but treated at the scene.

The crane collapsed near the intersection of Mercer Street and Fairview Avenue near Interstate 5 shortly before 3:30 p.m., Scoggins said.

Scoggins said officials do not yet know the cause of the collapse, which happened on a busy street.

“My thoughts and prayers are with those killed and injured,” Seattle Mayor Jenny Durkan said on Twitter.

The crane was atop an office building under construction in a densely populated area.

“It was terrifying,” witness Esther Nelson, a biotech researcher who was working in a building nearby, told The Seattle Times .

“The wind was blowing really strong,” she said, and added that the crane appeared to break in half.

Scoggins said the injured included a mother and child, and all the injured were taken to Harborview Medical Center.

A 28-year-old man, a 25-year-old mother and her baby were being evaluated for their injuries, said Susan Gregg, a spokeswoman for Harborview. None of their injuries are life threatening, she said.

FLINT, Mich. -- A Michigan sheriff joined protesters in Flint Township on Saturday, putting down his weapon and saying, "I want to make this a parade, not a protest." Genesee County Sheriff Chris Swanson spoke with demonstrators who were met by police officers in riot gear, local affiliate WEYI reported. "The only reason we're here is to make sure that you got a voice -- that's it," Swanson said in video clips…