HARRISON, Ark. — Ruby Kate Chitsey asked the woman in the wheelchair why she was staring intently through the glass doors. Her answer broke the fifth-grader’s heart.

Ruby Kate spends a lot of her summer at nursing homes near Harrison, Arkansas. Her mom’s a nurse practitioner and Ruby Kate likes hanging out with the residents.

But the 11-year-old admits it can get boring.

That’s why she approached the woman in the wheelchair as she sat watching her dog of some 12 years walk away. A friend had just brought him by for a visit, and the woman didn’t know when she might see her dog again.

“It was very sad. We have a lot of dogs and I could feel her pain,” Ruby Kate told CNN.

Ruby knew it cost money to get a pet sitter to bring the dog to the resident more often. Many in her hometown of 12,000 don’t have extra to spare.

That encounter last summer led the little girl to think: how many other residents couldn’t afford simple things that brought them joy.

She decided to do something about it. 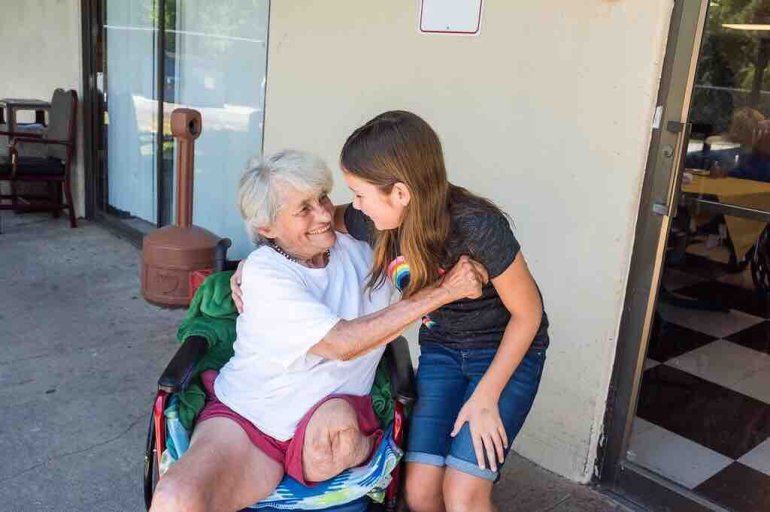 She began by writing their wishes down

Her mother helped her set up a GoFundMe account to help pay for those wishes.

The girl began asking residents what three things in the world they wish they had right now. She wrote down their answers in a spiral notebook that she had left over from the 3rd grade.

The answers surprised Ruby Kate and her mom.

One man said he wanted some pants that fit. Another asked for fresh fruit. The resident said she hadn’t had a fresh strawberry in eight years.

Many wanted the simple pleasure of eating food from outside the nursing home. Vienna sausages were a popular request.

Others asked for good books. Most of the books they have are castaways from thrift stores.

“I had known some of these patients 20 years,” said Ruby’s mom. “They told her things they would’ve never told me because she was a child.”

Others said they wanted a phone because there aren’t any in their rooms and they get lonely.

She caught the attention of GoFundMe

GoFundMe took note and named Ruby Kate a “Kid Hero” of the month. So far, the account has raised more than $70,000 for residents in five nursing homes in Arkansas.

Chitsey wants people to know most elderly living in nursing homes in the US rely on Medicaid. They get room and board and medical care — but just $40 in cash a month for anything extra.

“The system is built for your family to cover those gaps. In reality we see over 90% of my residents – they don’t have family visitors,” said the 46-year-old nurse.

“They don’t have family come. Some family don’t have a car to come or their family is old and can’t drive. For whatever reason, families are not filling those gaps.”

That $40 has to cover haircuts, pet food, even presents for grandchildren, Chitsey said.

She got to work

The majority of nursing home residents have dementia and can’t ask. So Ruby Kate and her mom fill in the gaps — higher-quality pillows, heavier blankets on the beds, better snacks.

“Comfort is huge,” Chitsey said. She ordered lumbar pillows because the chairs don’t have back support, and neck pillows for residents with dementia who can’t hold their heads up well.

They also ordered dolls that look like real babies for lonely residents to hold.

“Those are awesome for dementia residents,” Chitsey said.

And for those who like to watch the outdoor cats on the premises, the money went to neuter and spay, pay for cat food, and storage so the food doesn’t get wet.

“They weren’t new cars or a million dollars [they wanted]. They were very simple things that you could just go in Walmart and get — and that’s what we do,” Ruby Kate said.

The joy was written all over the residents’ faces.

She’s recruited a helper: a 74-year-old

Ruby Kate manages to visit residents two or three times a week to jot down their wishes and deliver the goodies.

Her mom decided to expand the program to all five nursing homes she serves. So she enlisted the help of a spry 74-year-old resident who was overjoyed at the request.

“It gives me something to do. It took away a lot of my depression — because I felt worthless and couldn’t do anything to help anybody,” said Marilyn Spurlock. “I’ve been here so long, I was no longer useful.”

Spurlock has been in a nursing home for eight years but her daughter visits every day and brings her home-cooked food — a luxury many of her fellow residents don’t have. It has always saddened her.

“Every day that goes by, I get a little more excited,” Spurlock said. “I go out into in the hub — the areas where people sit. I look and talk to them and ask if there’s anything they need.”

A lot of the needs she can just see on the residents — like men who haven’t had their hair cut in months.

“It picks up their spirits. Everybody wants to look good.”

Chitsey said she’s so moved by this experience she hopes to, one day, spread “Three Wishes” to nursing home residents nationwide.

“I think Ruby’s starting a movement — recognizing a need and just doing something about it. This is about their quality of life — bringing them joy.”

KANSAS CITY, Mo. -- Just before 5 a.m. Saturday morning police were called to the area of 10th and Summit to investigate the sound of gunfire in the area.

When officers arrived on the scene, they found three victims suffering from gunshot wounds.  One adult female victim died at the scene, another female victim and a male victim were taken to the hospital and are in critical condition.