PLATTE CITY, Mo. — Five years: That’s how long it took for one retired Marine veteran to find the right treatment while battling with post-traumatic stress disorder.

But with the help of a lot of people and a promising new technology, he is peeling back the layers of mental illness and finding his new mission.

Jesse Bennett’s homecoming, reuniting with his wife after months and months, was captured in a happy photo.

“We had done this many times around, and she knew this was a special moment,” he said.

Bennett served three tours in Iraq and Afghanistan and said he would do it again if he could. But at the end of his third deployment, Bennett said he knew something was wrong the moment he stepped off the bus to meet his family.

“It was like, in my head, it felt fake. It felt set up,” he said. “It felt like it wasn’t real… and in that moment, I knew something was wrong. I didn’t know what. I didn’t know how to explain it. It just didn’t click.”

A lack of purpose

For some of these warriors, returning home can be overwhelming. One moment you’re leading your brothers into battle.

The next day: “Both days are stripped down to their diapers. Two dozen eggs are broken on the kitchen floor, and they’re belly-sliding across the floor,” Bennett said of his young family. “And I’m like, ‘What is going on right now?'”

The Platte City dad can laugh about it now, but at the time he said it was chaotic. It shows the sharp contrast between war and civilian life.

Daniel Brazzell, the executive director of the local veterans nonprofit Team Fidelis, remembers what it was like coming home from his time at war.

“When I came home, it was kind of hard. You know, I wasn’t with my friends anymore. The sense of camaraderie was gone; that purpose in my life was gone, you know, of doing something great for my country,” Brazzell said. “Trying to find my way and find that purpose as a warrior is really hard.”

Bennett said his condition really began to sink in after he got home.

The bottom of the bottle

Bennett said he didn’t want to admit he had a problem at first. He wanted to be strong for the people around him.

And years of training to be a warrior makes your brain hyper-vigilant. At the time, Bennett said he only found one thing that could slow down his brain and tune out all the millions of sensors bombarding his mind.

“I was doing what I could do to maintain, and at that time, the only thing I knew was the substance of alcohol,” he said. “It was terrible.”

He said he almost didn’t put the bottle down.

“I’ve just took Marines out into the battlefield, and I came home, and I’m out of control,” he said. “It was crisis, no control, nothing that I had training for.”

But then, in 2014, there was a clear sign that Bennett needed help.

“To be brutally honest here, we could rewind the tapes here and five years ago, there was a newscast of Jesse Bennett, Platte City man who had just been found drunk in his car with his kid,” he told FOX4.

He was parked outside his home and hadn’t driven anywhere, he said.

After being charged with a DWI, Bennett pleaded guilty and was sentenced to a brief time in jail, probation, community service and treatment.

Fortunately, Bennett found the help he needed at the Kansas City VA Medical Center and Dr. Hemant Thakur, whom he met on his first day at the VA.

The local doctor specializes in PTSD at the Restorative Brain Clinic. Thakur also brings experience as a retired Army colonel with seven tours in Iraq and Afghanistan. He’s treated thousands of service members.

Under Thakur’s care, Bennett was taking medications to stabilize his symptoms, but he didn’t like the side effects.

“It messes with your mind because the medication — all of them, you hear every commercial goes on and on and on about every side effect there is,” he said.

And of course some medications mess with your sleep or weight. The constant frustrations had him questioning his approach.

Then one day Thakur proposed a new treatment not available at the VA, called deep transcranial magnetic stimulation or DTMS.

Thakur compared it to MRI technology and said it uses a special coil to target the areas of the brain responsible for PTSD.

“As years (have) gone by, the technology’s been refined, so deep TMS came up in the last literally 4-5 years,” Thakur said.

Thakur said the new treatment was originally developed for obsessive compulsive disorder, which he said is a tough condition to treat. But Thakur said DTMS has had a better effect for many OCD patients than other medications or therapies.

Now researchers and doctors have discovered its positive effects for some PTSD patients. 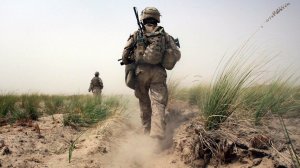 “They found the same coil (that) works for obsessive compulsive disorder also works for PTSD because you’re targeting the same parts of the brain,” Thakur said.

The FDA has already approved DTMS as an OCD treatment, and Thakur expects the agency will approve it for PTSD in the next year or two.

“We’ve been treating veterans with PTSD, with depression, and we’ve seen substantial improvement,” he said.

Here’s how it works

Each patient is fitted with their own hat and then the helmet, equipped with the special coil inside, is placed on the head.

Patients are treated over the course of six weeks, Monday through Friday. Each session lasts about 20 to 30 minutes. Every 20 seconds the patient gets a targeted electronic pulse. 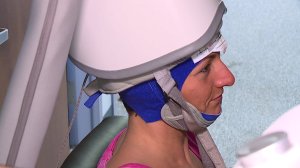 “It looked like craziness to me,” Bennett said he thought when Thakur first proposed DTMS to him.

But he learned it’s actually a pretty relaxing process once you get used to it. Bennett even got to watch TV to pass the time.

And those side effects that Bennett hated from his previous medications? Thakur said that’s not really a factor here. DTMS has few side effects and is less invasive than medicine and other treatments like electroconvulsive therapy.

“The only side effects we see is some patients may have a headache initially, which can be treated with Motrin or Tylenol, and they usually go away,” Thakur said.

He said DTMS is approved by most insurance companies, like Blue Cross Blue Shield, Aetna, Cigna and TRICARE. You can learn more about the treatment and Restorative Brain Clinic here.

While it might not be the perfect treatment for everyone, Dr. Angela Mayorga, a psychiatrist at KU Health System, said it’s another option to help warriors returning home from war.

“This is another tool in the toolbox for being able to help those people decrease their symptoms and live out their life they want to live,” she said.

In the end, experts say every veteran is different, which means their treatments will be, too.

“It’s not like an infection. Here’s antibiotics, and it works for everyone,” Brazzell said. “Everybody’s journey is different, and what works for some people might not work others.”

The Team Fidelis director said several therapies didn’t work for him, but he finally found one that did.

And 3-4 weeks into treatment, surprisingly it wasn’t Bennett but his kids who noticed DTMS was working for him.

“It was during the summer, so there was a lot of family involvement. My wife was coming, and the twins would come with me,” Bennett said. “My daughter, they would just see — they would say, ‘Dad, hey, we want you to keep doing this because we can tell it’s helping you. We can tell you seem happier.'”

And once they said something, he noticed a difference, too.

“I could tell that the tension, like just certain tension in my body, that my shoulders weren’t in my ears, my fists weren’t clinched all the time, and I wasn’t always tapping my feet,” Bennett said.

Now, the Platte City dad said he’s ready to enjoy all the people in his life and give back to the community.

But perhaps most importantly, this Marine finally feels like he’s ready to accomplish his new mission.

KANSAS CITY, Kan. -- A bridge construction project on U.S. 169/7th Street Trafficway in Kansas City, Kansas that has had both the northbound and southbound lanes closed for months is now complete and the road is back open to traffic in both directions.

The Kansas Department of Transportation reported the update Friday evening.

KANSAS CITY, Mo. -- One person is dead and another has minor injuries following a two-vehicle crash early Sunday morning in the Northland.

The crash was reported just after 3 a.m. on eastbound U.S. 152 Highway and Green Hills Road.

Along with fist bumps and remote work, another legacy of the COVID-19 pandemic has been the plexiglass fortification of businesses, airports and government buildings.

With the rate of COVID-19 infections falling in the United States, where a vaccine is readily available, coffee shop owners, school administrators and others may be wondering just how long they will keep the barriers in place.

Congress looks towards legislative action to fight off cyber-attacks

Person living in home not hurt after fire levels home, they were next door delivering ham

Beach-themed café opens in Leawood, latest from Made in KC