The Unitarian Universalist Association organized the demonstration as hundreds of its minsters are in town for the church’s annual General Assembly.

They gathered on the south end of the Barney Allis Plaza to share their message, singing songs in between speakers before making their way to the Community Health Council of Wyandotte County in downtown KCK.

They chose to hold the rally on Tuesday because it was Juneteenth, a holiday that marks the end of slavery more than 150 years ago, but organizers said black people continue to be imprisoned unjustly. 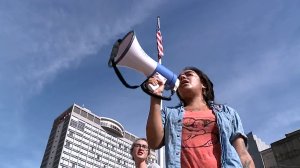 They believe the criminal justice system is tearing families apart and dehumanizing people across the country, especially people of color. The group of believers want to end pre-trial detention and cash bailouts, which they say is a play-for-pay system and is ruining families.

“The criminalization we heard about today is just horrifying,” said Kathryn Haughbaker, who traveled from Ohio to attend the church’s convention. “I drove here, so I was pushing the speed limit. But I can do that with impunity because I’m white, and that’s unfortunate, and I just want to do everything I can to have a fair equal and just society.”

Another issue that is important to this group is immigration. They denounced the Trump Administration’s “zero tolerance” immigration policy that has separated migrant children from their parents at the U.S.-Mexico border. The group called the policy “immoral.”

Chiefs’ Watson expected to emerge as a top receiver