ODESSA, Mo. — It’s going to be a few months later than planned, but I-70 Motorsports Park in Odessa has set an opening date for August.

Chris Payne, the developer and new owner of the old I-70 Speedway, said weather and construction delays have pushed things back a bit. He originally planned for a May opening for the dirt track. 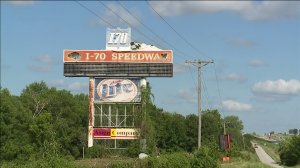 County commissioners voiced concerns about noise and traffic initially, delaying when he planned to start construction work. Just this week, he received final approval from Lafayette County. The recent weather hasn’t helped either.

Races scheduled for May, June and July have been canceled.

But now Payne said the historic race track — with a new look — will open for its first official race August 17. The event will feature ASCS Sprint cars and Late Model stock cars at the dirt track.

And the track already has another ASCS Sprint car event scheduled for a few weeks later on Sept. 7.

The famed I-70 Speedway operated in Odessa from 1969 to 2008. It was shut down for a decade before Payne took ownership of it to bring racing back to Lafayette County.

Check out the video player below to see the behind-the-scenes look FOX4 got of the overgrown track in 2018 when Payne took over.