LAWRENCE, Kan. — President Barack Obama is coming to Lawrence on Thursday and people lined up on Tuesday hoping to get a ticket for his speech.

“I’m waiting to get a ticket so I can hear and see my favorite fella,” said Fern Coffin, who lives in Olathe.

Coffin is 100 years old, plus three months, but you would never know just talking to her. 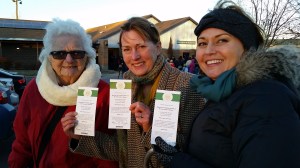 “I like his looks, he looks so young, and I like the way he wears his hair,” she added.

She came to the Douglas County Fairgrounds at 10 a.m. with her daughter and granddaughter, and sat at the front of a long line of people waiting to get tickets to hear President Obama speak at the University of Kansas on Thursday.

“He’s been a favorite of mine for a long, long, long time,” Coffin said.

Woodrow Wilson was president when she was born in 1914. She’s been alive through 17 presidencies, but has never seen sitting president in person.

“Oh I said, can he be coming to Lawrence, a little town like this, in the middle of the country?” Coffin said. 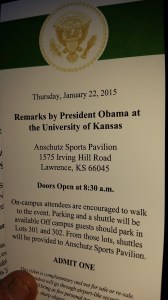 Mary Martin, who has also waited in line for hours, shared Coffin’s love for Mr. Obama, and they quickly became friends.

“We’re having a little party out here, everybody is sharing food, and drink, and we’re trying to kill the time to go see the king,” said Martin.

Both women say they’re going to listen to President Obama’s State of the Union Address on Tuesday night.

“I hope he tells me that the economic improvements have continued and is going stronger,” added Coffin. 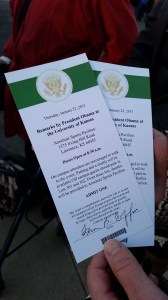 They’re planning on seeing the president speak Thursday morning on KU’s campus where he’s expected to discuss themes from his State of the Union Address.

“I’m going to have my bells on, and more t-shirts, and I’m going to be ready,” Martin said, “This is really our emancipation day when Obama gets here.”

“It’s a very exciting part of my life,” said Coffin.

President Obama is scheduled to arrive in Topeka on Wednesday night and will head to Lawrence from there. He will speak at the Anschutz Sports Pavilion next to Allen Fieldhouse at 11:20 a.m. on Thursday.

George Floyd's girlfriend, Courteney Ross, said that she was confident that the jury would return a conviction of former police officer Derek Chauvin in the killing of her boyfriend.

She also expressed hope that the jury's decision would lead to justice for people who have been wrongfully convicted.

President Joe Biden called the guilty verdict in the trial of former Minneapolis police officer Derek Chauvin "basic accountability," as he addressed the nation Tuesday night, hours after Chauvin was found guilty on three counts in the murder of George Floyd.

"It was a murder in full light of day and it ripped the blinders off for the whole world to see the systemic racism the vice president just referred to," Biden began, referring to Vice President Kamala Harris, who spoke earlier.

These are the new Apple products revealed at 2021 event