Skip to content
Watch Now
Watch Now
FOX4 Weekend Mornings
This is an archived article and the information in the article may be outdated. Please look at the time stamp on the story to see when it was last updated.

KANSAS CITY, Mo. – The owner of Leon’s Thriftway, which closed three months ago, is trying to bring the store back.

Leon Stapleton still remembers the day he opened his grocery store at the corner of 39th and Elmwood Avenue. The year was 1968. Dr. Martin Luther King Jr. had just been assassinated and riots broke out in Kansas City.

“They threw a bomb or something through the window and it was closed,” the 93-year-old said. “Nobody else wanted it.”

Stapleton, who worked for Safeway for 21 years, opened Leon’s Thriftway and operated the store with his son, Vernon, for more than 50 years.

“It was the first black ever owned supermarket [in the city, possibly the country],” Stapleton said.

They were forced to close in May 2018 after about a decade of declining sales. Stapleton said they didn’t own the property, and the person who did wasn’t willing to evolve with the changing times. 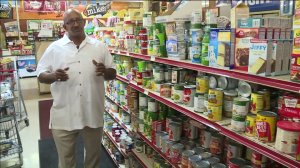 Vernon said the family’s grocery store financed their liquor store, which remains open next door to the now-defunct grocery store.

“When that stopped, this really couldn’t hold its own because we’re still paying bills from the bigger store,” Vernon explained.

He estimated they still have $40,000 worth of inventory they’ve since crammed into the smaller store – a lot of it admittedly dated.

“We can get where we’re going sooner if we can sell what we already have,” he said.

They’re trying to sell off the merchandise to generate revenue so they can turn the liquor store into more of a convenience store with perishable items. 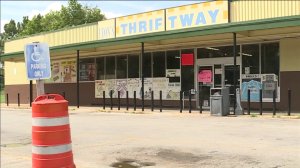 The Stapletons want to keep the business they already have afloat, with the hopes that someone will buy the property, believe in their vision and help bring Leon’s Thriftway back to the neighborhood.

“The people who did come in here appreciated the store,” the elder Stapleton said. “They still don’t want me to lose it.”

“This neighborhood wants the store,” his son added. “They don’t want another Family Dollar or Dollar Tree. There’s enough of them.”

The Stapletons said if they can’t sell the inventory, they’ll donate it to food pantries willing to take it.

According to police, just before 1:30 a.m. an off duty officer saw a white SUV driving on Mill Street and firing shots.

Leavenworth woman sentenced to 3 years for death of son