KANSAS CITY, Kan. -- Kansas has issued an Amber Alert for a missing two-year-old boy out of Kansas City, Kan. 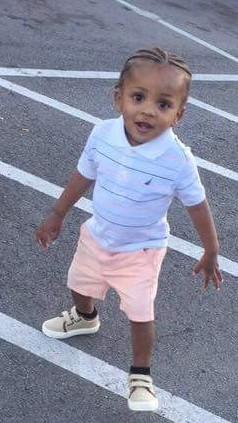 At approximately 12:53pm, Jace Brunt was forcibly taken from his biological mother by his non-custodial father. The father allegedly used a firearm to force compliance and the girlfriend allegedly used mace / OC spray during the event. The violent actions at the scene indicate that Jace is in imminent danger. The suspect left the 1700 of block of S. 35th Street, Kansas City, Kansas, heading south in a white Dodge Charger with rear end damage.

Call 911 immediately if you have seen the missing child, suspect, or suspect's vehicle. If you have other information on a missing child, call 911, or the Kansas City, Kansas Police Dispatch at 913-596-3000.

Jace is a black male. He has short fuzzy hair with a pony tail on top. He was wearing pajama pants and a dark t-shirt or tank top and no shoes.

Jace is believed to be taken by his non-custodial father,  Joshua Andrew Brunt, 25. He is approx. 6'1", muscular build, wearing red shorts and a tank top. Tattoos on arms and neck.
His wife is Jasmine Brunt (Redmond), age 24. The woman is 5'8", wears long braids in a pony tail, with slender build. She was last seen wearing black spaghetti strap tank top, green basketball shorts.
They were in the white Dodge Charger with rear bumper damage, tinted windows and black rims. Click here for our newscast livestream, where we'll have live updates from reporters talking to police and Jace's mom.

Can coronavirus spread through food? Will warm weather stop the outbreak? Local doctor answers your questions about COVID-19

While a lot of musicians are taking to social media, performing for fans who are stuck in thier homes, Spike Lee made the script available online for "Jackie Robinson," a movie that he was never able to get made.

He made the announcement on his Instagram account Sunday, saying in a video that making the film would've been his "dream project."

Jack died Tuesday at a hospital in Surrey, England, the BBC reports. Jack's agent, Jill McCullough, said he hadn't been able to see his wife before he died because she was under quarantine in Australia.

Not all heroes wear capes -- but some of them do wear stethoscopes.

Dr. Anthony Fauci, director of the National Institute of Allergy and Infectious Diseases, has long been celebrated in the medical world.

Loose Park’s gates are closed, but that doesn’t mean the park is too

US seeing ‘glimmers’ that social distancing could be slowing the spread of coronavirus, officials say

Train like the MVP: Patrick Mahomes and girlfriend Brittany share what they’re doing to stay in shape

Loose Park’s gates are closed, but that doesn’t mean the park is too