Allred said her client, Beverly Young Nelson, would be willing to testify under oath and called on the Senate judiciary committee to hold a hearing and subpoena Moore.

“Mr. Moore attacked me when I was a child,” Nelson said, adding that she was 15 when he began flirting with her and 16 at the time of the alleged assault. “I want Mr. Moore to know that he no longer has any power over me.”

The allegations of force, if true, would be considered sexual abuse in the first degree, but the statute of limitations in effect at the time would have passed. Later Monday, Moore called the allegation “absolutely false.”

Nelson detailed her allegations in a statement alongside Allred, an attorney who focuses on discrimination and women’s rights.

Nelson said Moore was a regular at the Olde Hickory House, a restaurant she worked at when she was starting high school.

At the press conference with Allred, Nelson said Moore wrote an inscription in her yearbook one day in December 1977 that said, “To a sweeter more beautiful girl, I could not say, ‘Merry Christmas.'” She said he signed it “Roy Moore, D.A.”

She said that one evening he offered her a ride home.

Instead of taking her home, Nelson said Moore pulled his car behind the restaurant and began to attack her.

“Mr. Moore reached over and began groping me and putting his hands on my breasts,” Nelson said.

She said she tried to open the car door to leave, but Moore locked it and continued to grab her. 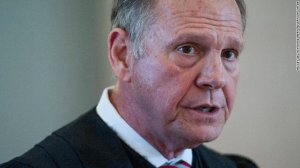 “He began squeezing my neck, attempting to force my head onto his crotch. I continued to struggle,” Nelson said. “I thought that he was going to rape me.”

She said she began to cry and beg him to stop and that eventually he did relent before telling her not to speak.

“At some point he gave up, and he then looked at me,” Nelson said. “He said, ‘You’re just a child,’ and he said, ‘I am the district attorney of Etowah County and if you tell anyone about this, no one will ever believe you.'”

Moore called the accusation “absolutely false” in a statement outside a fire station in Gallant, Alabama later Monday, denying that he knew Nelson and adding that he didn’t know where the restaurant that she described was.

“I don’t even know the woman,” he said. His wife, Kayla Moore, spoke as well, calling this “the ugliest politics” she had seen.

As reporters gathered to hear the accusations at Allred’s press event, the Moore campaign released a statement denying Moore had “any sexual misconduct with anyone.”

“Gloria Allred is a sensationalist leading a witch hunt, and she is only around to create a spectacle,” Moore campaign chairman Bill Armistead said. “Allred was the attorney who claims credit for giving us Roe v. Wade, which has resulted in the murder of tens of millions of unborn babies. We’ve said this before and we’ll say it again: Judge Moore is an innocent man and has never had any sexual misconduct with anyone. This is a witch hunt against a man who has had an impeccable career for over 30 years and has always been known as a man of high character.”

The accusations on Monday came after The Washington Post published a bombshell report last week based on interviews with more than 30 people, saying Moore pursued relationships with teenage women while he was in his 30s. One woman said she was 14 years old when Moore initiated sexual contact with her.

Nelson said she was inspired to speak out because of the women that came forward to the Post.

“I would probably have taken what Mr. Moore did to me to my grave had it not been for the courage of four other women that were willing to speak out about their experiences with Mr. Moore,” Nelson said.

Allred said her client declined to take questions but would be willing to speak in public further should the Senate Judiciary Committee decline to hold a hearing on the matter in the next two weeks.

The Alabama Senate special election is currently scheduled for December 12.

Some Republicans have called for Moore to step aside in light of the accusations from the Post story. Moore has denied the allegations in the report.

O'FALLON, Mo. — Leaders of Missouri’s largest metropolitan areas are now requiring face coverings in response to the surge in confirmed coronavirus cases, but many other places across the state are leaving it up to individuals to decide.

Kansas City and Jackson County began requiring face coverings for residents in public earlier this week, and St. Louis city and county leaders on Wednesday announced similar measures. Some other cities and counties are encouraging, but not requiring masks, including Springfield.

KEYSTONE, S.D. -- President Trump is planning to head to South Dakota on Friday for an early Fourth of July celebration. The function will include a fireworks show over Mount Rushmore, which has not been done in a decade.

The event has already faced criticism for the risks it carries during a pandemic. Governor Kristi Noem told Fox News that there will be no social distancing enforced at the holiday event, citing an emphasis on "personal responsibility" to keep people safe.

Why have deaths stayed steady while COVID-19 infections are spiking in the US?