INDEPENDENCE, Mo. — The Applebee’s restaurant inside the Independence Center is officially closed for good.

According to an Applebee’s spokesperson, the restaurant is now permanently closed, and employees have been offered jobs at nearby locations.

The announcement comes nearly one week after two young women were accused of dashing-and-dining at Applebee’s. One of the women recorded the incident, calling it racial profiling. Three Applebee’s employees were fired because of the incident.

The restaurant closed down shortly after the incident. 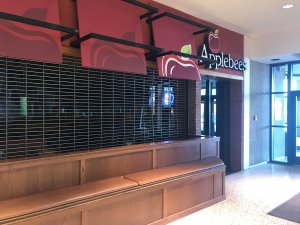 In the video, the two women encounter an Independence police officer, a mall security guard, a manager and server at the Applebee’s restaurant.

The women were eating dinner there when two officers approached them about a “dine-and-dash” theft that had happened the day before, in which two women, apparently resembling them left without paying for their food. However, the women say the server’s description of the dine-and-dashing women was vague, with few details other than skin color and body size.

“We have not been here!” Asia Hardy repeatedly exclaims to one officer.

Throughout the video that had been viewed millions of times, the anxiety over the accusations and interruption of their meal continues to grow and Hardy becomes even more visibly upset about the alleged racial profiling that she says was occurring.

Her friend Alexis Brison tells the officer, “We’ve been shopping. We’re just trying to have a nice dinner. Can we just pay for our food? We haven’t done anything.”

The Independence police officer asks the women to put themselves in his shoes, explaining he needed to ask them questions since the manager called police believing they are the same women who dined and dashed.

“You’re doing your job but the restaurant isn’t doing its job. Because if she’s positive that she’s seen us, we haven’t been in here,” Brison said.

The women ask if there are cameras to prove they aren’t the women from the food theft the day before.

The officer tells them to: “Just relax.”

When the police officer tells the women that the restaurant manager decided he or she wants them to pay for their food, leave and not come back, the women eagerly agree, but grow more upset.

In a statement released Thursday, the City of Independence said:

On Friday, Feb. 9, the Independence Police Department was called by Independence Center mall security to assist at the Applebee’s restaurant on what was reported as a theft. Applebee’s has since identified this request as having racial undertones on behalf of its staff, and three restaurant employees were terminated by Applebee’s as a result of their actions.

Since the event transpired on Friday, the officer’s professional conduct has been carefully and thoughtfully reviewed by the Professional Standards Unit to ensure compliance with departmental policy. The City of Independence does not comment on any findings or outcomes with regard to the matters of personnel.

“For many years, our officers have been regularly called to assist businesses within Independence Center and this relationship is an important tool to reduce crime and disorder,” Chief Brad Halsey said. “Applebee’s has taken steps to address this situation. We carefully consider each interaction of our officers with the public for opportunities to learn and train to better serve our community.”

The department provides continuing education training on a regular basis for each of its officers. The newest program, Fair and Impartial Policing Practices, includes implicit bias recognition. Further, policies and procedures related to this incident are being evaluated to determine if changes are appropriate for the future.

“We sincerely regret the negative experience the young women involved had in our City,” City Manager Zach Walker said. “City staff receive regular training on diversity and sensitivity to ensure the diverse populations we work with have a fair, equal and inclusive experience. We make every effort to provide the highest standard of service and hold our staff to these high standards.”

“At Applebee’s, we do not tolerate racism or bigotry of any nature. We regret any incident like this, because we want every guest experience to be positive. Our team has been working throughout the weekend and will continue to work to determine what happened and what appropriate measures will be taken. We currently have no indications this was race related. We have a diverse workforce that is reflective of the community we serve. All are welcome at our restaurant, and will continue to be welcome.”

Independence Police said they had not received a police report on either the incident shown in the video or the dine-and-dash incident the day before.

The attorney for both women, Ryan Kaiser, said at this time they have no comment related to the incident.