KANSAS CITY, Mo. — Items purchased at an estate sale in 2010 for Kansas City jazz legend — Oscar “Lucky” Wesley have turned up. The icon’s grandson is thankful he’s getting back a piece of family history.

The grandson of Wesley, a long time bassist for the Scamps, was recently contacted by a local auction house…and now has items from his grandfather he never knew existed.

Turner was at an auction recently when he came upon items that seemed important. He was the winning bidder, and brought it back to Kansas City, where he told a friend of his what he found.

“And she said, ‘oh my goodness, I know his grandson! You guys have to meet up,’” Turner said.

The items belonged to Oscar “Lucky” Wesley –a longtime bass player and vocalist with local jazz group the Scamps.

“He was basically my father, he was the one that raised me,” said Phillip Wesley, Oscar “Lucky” Wesley’s grandson.

Wesley, 31, was shocked when Turner contacted him about his grandfather.

“I think it just shows his character, and what a great guy that he is, and when he first called me I couldn`t thank him enough,” Phillip said.

“It`s not all about the money, the right thing to do is to give this guy his grandpa`s stuff,” Turner added.

Phillip says he has his grandpa’s eclectic taste in music — and has since adopted his nickname – “Lucky”.

“It`s actually a play on being unlucky, … he started off as a trumpeter, he was playing his trumpet, and the emcee went to go and adjust his microphone, and it hit the end of his trumpet and knocked his two front teeth out, and he couldn`t blow the horn the same anymore, so he taught himself to play bass,” Phillip said with a chuckle.

Phillip says after the Air Force, his grandfather joined the Five Aces, then the Scamps. He died of stomach cancer in 2010.

If you have related items, and want to contact Phillip, he goes by “Lucky Wesley” on Facebook.

There is even an honorary street — Scamps Alley — on 8th and Central named after the band and it remains in Kansas City today.

There are still some items that Wesley would like back.

One piece in particular is this black and white painting by a local artist of his grandfather playing his bass. 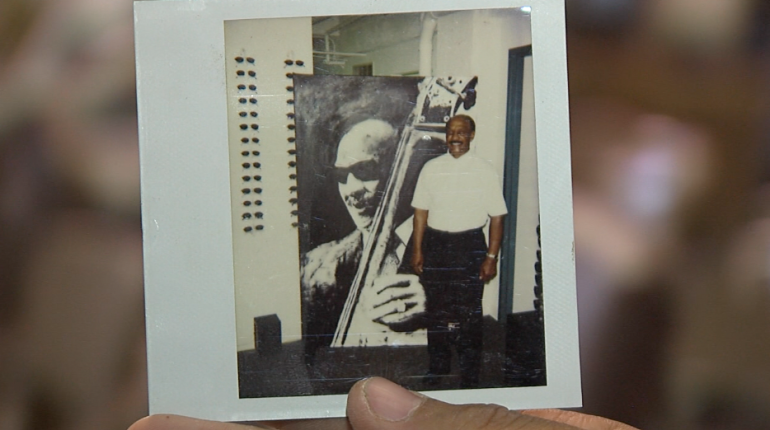 BestReviews’ tips and products for those who are …

According to information presented in a recent NewsNation article, “a whopping 80% of New Year’s resolutions fail by February.”

Have you been neglecting your scalp? These products …

If you’re having issues with slow hair growth, thinning hair or a dry, itchy scalp, check out these products for getting your scalp in top shape.

You can already find this year’s color of the year and similar shades popping up in home decor items, such as throw pillows and area carpets.

MO man found with nearly 60 grams of meth in Paola

KC-area small business owners hope to cash in as …

MO man found with nearly 60 grams of meth in Paola

What’s a jabroni? Kelce fires back at Cincy mayor