They’re forced to dodge trash cans collecting that water as they walk down the halls of the school.

According to some concerned parents, there’s now a growing concern about the possibility of mold because of all of the moisture inside the school. 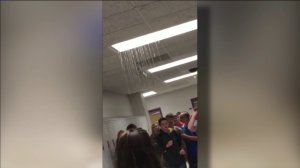 “I’m in that building quite often. The building’s old, more than 50-plus years old,” said Sarah Meakins, mom to two Belton students. “When it comes to the rain through water fixtures, water coming through — yes, dangerous, yes, needs to be addressed.”

Meakins is an active member of Belton PTSA and attends every school board meeting. She said the school board has discussed the issues with the building’s ceiling and roof during several recent meetings.

But Meakins said she’s worried that other parents either don’t know about more concerning problems at the school — or they’re just not as concerned as she thinks they should be.

“This building right now has seventh, eighth and ninth graders. It has about 250 more students at this time, with only three classes in it, than it did when it was a high school. That needs to be addressed first. The overcrowding of an old building is only going to make things worse,” Meaksin said. “There’s almost 1,100 students in that building. It should be more than just four parents to be their voice.”

“The Belton School District and the Board of Education have had multiple discussions about the roof conditions at Belton Middle School/Freshman Center.

At the April 25, 2019 Board meeting, the Board approved allocations to repair the roof. Currently, Delta Roofing and Alpha Roofing are working to identify and repair leaks.

The District has also had a company conduct air quality tests at this building and several others across the district. All of the reports showed a low MoldSCORE, which means it ‘did not detect, relative to the outside air, the presence of indoor mold growth in the building at the time of sampling.'”

Meakins said she’s optimistic about the future of the school and the promises that are being made, but she said there’s still more that needs to be done.

The school district has hired a company to temporarily patch the middle school’s roof.

The roof will eventually be replaced. The board already approved a bid to pay for the project in April.

ATLANTA -- A month since Georgia took some of the earliest and most extensive steps to reopen parts of its economy, COVID-19 cases have largely flattened in the state, albeit with a slight recent uptick.

"The bad news is we are not seeing a reduction in transmission, but I don't see a spike in transmission," Dr. Gerardo Chowell, professor of mathematical epidemiology at Georgia State University's School of Public Health, said.

TRENTINO, Italy -- An Italian family's mountain hike took a hair-raising turn after a brown bear followed a child down a mountain path during a day out. In a video of the nail-biting encounter in Trentino, northern Italy, 12-year-old Alessandro can be seen walking slowly towards his stepfather -- as brown bear follows closely behind. The boy's stepfather can be heard trying to coax the boy to keep moving towards him, calling "come,…

The anchovies we know today are small, plankton-eating fish that often flavor our Caesar salads and pizzas. But fossil records show that anchovies of yore were more formidable. An international group of researchers recently reported two species of fishes that roamed the seas about 40 to 45 million years ago. The two species had fangs lining their lower jaws, and a single saber tooth on their upper jaws, suggesting that…