YELLOWSTONE NATIONAL PARK, Wy. — A sad update to a story that seemed at first glance to be a simple mishap.

A father and son were reportedly ticketed at Yellowstone National Park after they placed a bison calf in the back of their SUV in an attempt to protect it from the cold.

A mother chaperoning a school group that witnessed the calf in the vehicle posted her account on Facebook, which quickly made the rounds on news sites and social media. 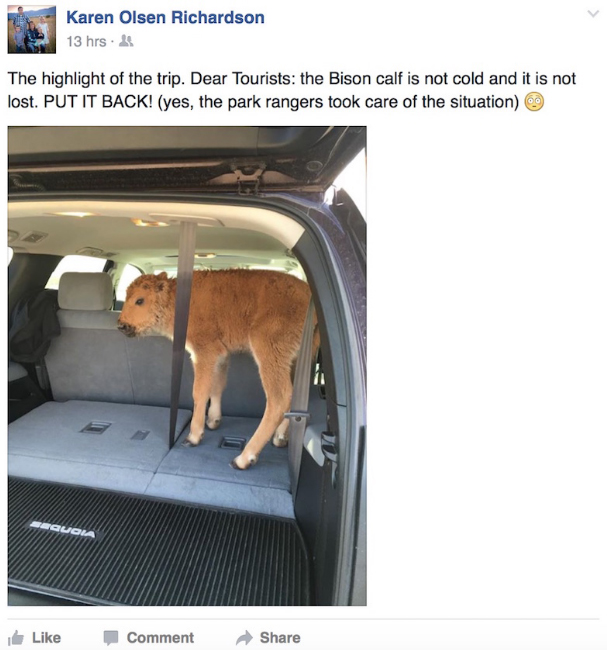 The two visitors were clearly ill-informed, as the bison are perfectly suited to exist in that environment, as they always have.

But while their heart was in the right place, the father and son were also unaware of the effect their actions could have on the rest of the herd, and that’s where the story takes a grim turn.

East Idaho News reports that rangers made the tourists return the calf to where they picked it up, but it was rejected by the herd.

Rangers had no choice but to euthanize the newborn calf after attempts to reunite it with the herd failed. Abandoned, the young bison began to create a dangerous situation by continually approaching people and cars on the road.

The event highlights a major problem for park rangers and natural wildlife. Visitors approaching wildlife is not only a danger to people, as adult animals are very protective of their young and can become aggressive if they feel a threat, but clearly these actions are a danger to the animals themselves.

Yellowstone regulations prohibit visitors from approaching wildlife and say you should stay at least 25 yards away from large animals such as bison, elk, and deer, and at least 100 yards from bears and wolves, according to the National Park Service website.

So please, when you visit a national park, respect the wildlife, the rangers, and the rules.

Americans feeling the rising price of inflation on …

Dozens of cars busted, broken into at Raytown apartments

Hurricane Ian could hit areas where fertilizer is …

Dozens of cars broken into at Raytown apartments