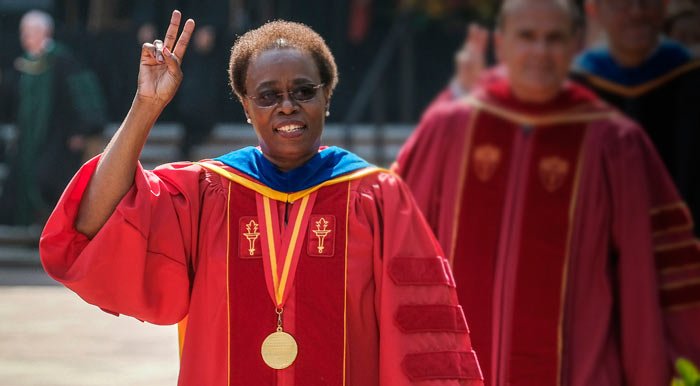 Dr. Wanda M. Austin is the Interim President of USC and a barrier breaker who is internationally recognized for her work in aeronautics and systems engineering. She is co-founder of MakingSpace, Inc, a systems engineering and leadership development consultant and motivational speaker. She is the former president and CEO of The Aerospace Corporation, an independent, non-profit organization dedicated to the application of science and technology toward critical issues affecting the nation’s space program. From January 2008 until October 2016, Austin led the organization’s 3600 employees and managed annual revenues of $950 million at 17 offices nationwide. As the sixth president, she was the first female and the first African American in the 57-year history of the organization.

Austin served on the President’s Council of Advisors on Science and Technology until January 2017, advising President Barack Obama in areas where an understanding of science, technology and innovation was key to forming effective U.S. policy. Austin is currently a member of the Defense Policy Board having previously served on the Defense Science Board and the NASA Advisory Council. She is a member of the National Academy of Engineering. She is an honorary fellow of the American Institute of Aeronautics and Astronautics (AIAA) and a member of the American Academy of Arts and Sciences. She sits on the Board of Directors of the Chevron Corp. and Amgen Inc. She has served on the USC Board of Trustees since 2010. In 2018, she received the USC Presidential Medallion.