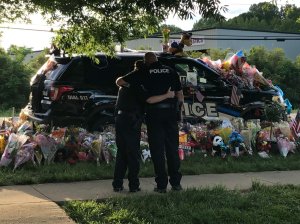 MOORESVILLE, N.C. — An officer died in North Carolina, and his sacrifice was felt as far away as the Sunshine State.

Investigators say the suspect, identified as 28-year-old Michael Yovany Aldana, shot Sheldon and then went to an apartment complex on Rinehardt Road. The suspect was found dead of a self-inflicted gunshot wound.

On Sunday, a 10-year-old Florida boy named Zacharia honored Sheldon’s sacrifice as he has already has for dozens of other fallen officers.

This run is part of the boy’s commitment to run 164 miles for the 164 officers who passed away in 2018 and an additional mile for each officer who dies in 2019.

LOS ANGELE -- Brittany Murphy's death has long been cause for speculation. The "Clueless" and "8 Mile" actress died in 2009 at the age of 32. Murphy's death was ruled accidental and determined to have been caused by a combination of pneumonia, an iron deficiency and "multiple drug intoxication," the Los Angeles County coroner said at the time. But the death months later of her husband, Simon Monjack, which was also ruled as…

(CNN) -- People who have been sick with coronavirus infections should stay away from other people until they've gone at least three days with no fever, have seen symptoms improve, and until it's been 10 days since they first noticed symptoms, the U.S. Centers for Disease Control and Prevention said in updated guidance.

The CDC updated guidance on when it's safe to leave quarantine, as well as some consumer-friendly guidance on using public transit and ride shares as states loosen restrictions on opening schools, businesses and leaving home.

MIAMI, Fla. (WGHP) — A tropical storm formed off the coast of South Carolina Wednesday, according to an 8:30 a.m. update from the National Hurricane Center.

A Tropical Storm Warning is in effect for Edisto Beach to South Santee River in South Carolina.