LIBERTY, Mo. — The parents of a 12-year-old boy with autism say their son is lucky to be alive after an older boy severely beat him in the school cafeteria. The boy’s parents say they warned the principal at Liberty Middle School about their son’s attacker a month ago.

Destiny Kitchen mailed a certified letter to the principal last month, detailing bullying that was happening to her older son by this same boy, and asking the school to protect her kids. 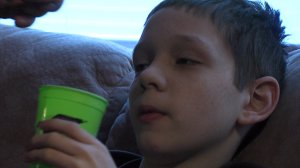 She says nothing happened. Blake Kitchen, 12, has Asperger’s Syndrome, a form of autism. He likes routines and eats in the same spot every day. But when he arrived at school Thursday for breakfast, another boy moved his belongings from his seat. When Blake asked him to move, the boy who had been bullying his brother stepped in and started beating Blake until he blacked out.

“It makes me sad and angry to see him have that moment of terror,” said Destiny Kitchen, Blake’s mother.  “Is your son going to make it? To listen to him cry and say, ‘Mommy I’m going to die. Please don’t let me die I’m not ready.’ It could have been avoided.”

Blake spent four days at Children’s Mercy Hospital, and is heading back to the hospital after starting to bleed again Tuesday. He has a jawline fracture, fractured skull and damage to his ear that may require surgery.

“My ear hurts, my jaw hurts, my back hurts and that’s all,” the boy told FOX 4 News.

Destiny says the 8th grader who attacked Blake weighs more than 200 pounds and has a history of in-school suspensions. That boy is in juvenile detention while Liberty police investigate the crime.

In a written statement the Liberty School District says the incident involving Blake is being reviewed and school leaders are cooperating with police in their investigation.