GRANDVIEW, Mo — It’s business as usual at Streetwise Contracting in Grandview, but Friday was a different story.

A thief jumped into a company truck parked near the eastbound lanes of Interstate 435 between Holmes and Wornall.

It happened as employees worked in the construction zone Friday. The company’s vice president said the thief didn’t even seem to care he committed a crime on a busy highway in the middle of a construction zone.

“The keys were in the ignition because we move up to take the cones down, one at a time, one at a time. The guys were up in  front of the truck. It was a pretty brazen move to pull up, jump in our truck and take off,” company vice president Mike Olsen said. 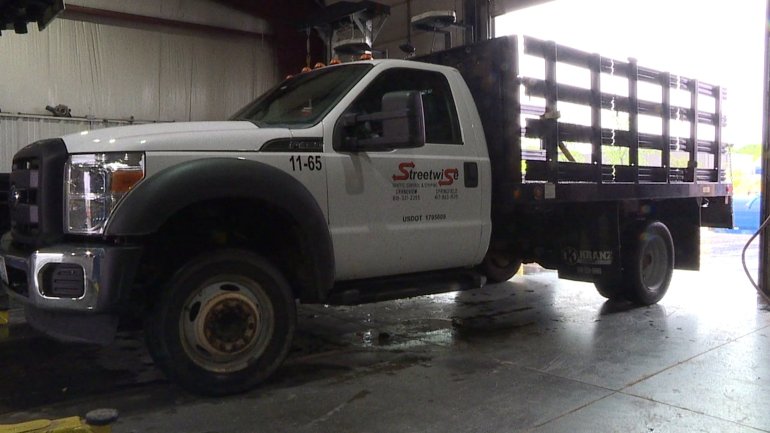 Along with the missing truck, the thief hauled off barrels, cones and signs. Plus, some of the workers’ personal items were in the truck at the time.

“It’s crazy. I can’t believe what this world is coming to. Especially guys out there, working on the interstate,” Streetwise general manager Andrew Tate said.

This is the second time someone’s stolen a truck from Streetwise contracting in the past two weeks.

“We’ve been doing this for 12 years, Streetwise for 12 years, and never had a vehicle stolen. It’s been a mirage the last couple of weeks,” Olsen said.

For now, workers are able to get through the work day with the equipment they have. But Olsen said things would run a lot smoother with the return of their missing truck and tools.

The license plate of the missing truck is 15J-7GU.

Will Mizzou football start this fall? Athletic Director shares how the pandemic is changing sports

WASHINGTON D.C. — President Donald Trump on Wednesday threatened social media companies with new regulation or even shuttering a day after Twitter added fact checks to two of his tweets.

The president can’t unilaterally regulate or close the companies, which would require action by Congress or the Federal Communications Commission. But that didn't stop Trump from issuing a strong warning.

ATLANTA -- Antibody tests used to determine if people have been infected in the past with COVID-19 might be wrong up to half the time, the U.S. Centers for Disease Control and Prevention said in new guidance posted on its website.

KANSAS CITY, Mo. -- Evergy announced an extension of their pandemic customer assistance on May 27, in which the company promises to not shut off residents' power during the coronavirus pandemic.

The energy company announced that they won't shut off power for customers facing financial hardships back in March. Evergy said the courtesy will apply to all residential and business accounts.

Looking to take a Missouri road trip? Check out these destinations

Looking to take a Missouri road trip? Check out these destinations