KANSAS CITY, Mo. —  On Monday morning at 11:00 a.m., two companies once in competition for the contract to rebuild KCI airport announced they were partnering and ‘100 percent’ ready to move forward with the project.

AECom was the airport committee’s second choice after Edgemoore Infrastructure to build the single-terminal airport. Burns and McDonnell didn’t make the top three, but was the company that essentially got the ball rolling when it offered to build the airport at no cost to taxpayers. Initially, leaders were excited at the Burns and McDonnell proposal, but when other companies expressed interest in the project, they opened it up for bids.

On Thursday, in a 9-4 vote, the Kansas City council rejected the memorandum of understanding  (MOU) with Edgemoor, the company it selected in September to design the new, single-terminal Kansas City airport.

Talks broke down with Edgemoor. The mayor claimed a deal was still on the table if council members would only return to it, but council member Lee Barnes Jr., said the council was moving on.

Over the weekend, Kansas City manager Troy Schulte tried to explain the reasons for the discord among Kansas City leaders about the Edgemoor memo. Click here for his tweets.

On Monday morning, leaders from both AECom and Burns & McDonnell announced their partnership and said they’ll deliver a financial proposal that’s fair to the city and deliver a terminal design that everyone will be proud of.

AECom and Burns and McDonnell said they’re ready to step up and answer all the questions citizens have.

“The KCI Partnership has invited Burns & McDonnell to join this team. This was.. there’s only two firms that the city is considering right now to do this project and I can tell you all that KCI Partnership is the only one that reached out to Burns & Mac and offered an opportunity to work on this project that we’re all so proud of to have developed,” said Ron Coker, Senior Vice President Burns & McDonnell.

If the council decides to completely cut ties with Edgemoor, KCI Partnership believes a memorandum of understanding can be signed in 30 days with AECom and and Burns & McDonnell.

‘We always felt that the emergence of Edgemoor, something was funny about that. In that the commitment to the minority community was less than those of the other qualified respondents,’ said Kelvin Perry, president of the Black Chamber of Commerce of Greater Kansas City Inc.

However, after the joint news conference, council member Jermaine Reed sent out a statement, cautioning the city against seeking proposals prior to allowing Edgemoor the opportunity to resolve concerns.

“Any talk at this time about moving on from the MOU with Edgemoor is premature.  There’s no need for anyone — whether it be Burns & McDonnell or AECOM — to mount a public campaign for the project until our negotiations with Edgemoor are completely resolved,” Reed, who represents the 3rd district, said.

Following Thursday’s turmoil in which it looked like negotiations with Edgemoor had broken down, leaders came out to voice their opinions– and even disgust- at the turn of events.

Kansas City Mayor Sly James didn’t hold back his resentment that the council voted down Edgemoor’s agreement memo. He said the councilmembers who voted against Edgemoor’s memo of understanding were ‘playing politics.’ The mayor said there’s still plenty of time to strike a better deal with Edgemoor, but councilman Lee Barnes Jr., drew up an ordinance to ditch Edgemoor and move onto the No. 2 pick, AECom. He is expected to present it Thursday night at the next city council meeting. 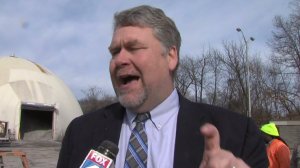 On Saturday, City Manager Troy Schulte tried to explain the problems encountered during negotiations with Edgemoor.  He sent out 16 tweets that day that identified the key issues that were apparently insurmountable as they negotiated with Edgemoor.

Missouri doctors make discovery about possible cause of long COVID

Is sneezing a symptom of omicron?