KANSAS CITY, Mo. — A Lee’s Summit couple is left with more than $10,000 worth of damage to their car after part of a ceiling in a downtown Kansas City parking garage crashed on its roof.

“We’re paying to park. We’re not paying to get our car trashed,” said Brad Korn, whose fiancé owns the car.

On Friday, they parked at the Auditorium Plaza Garage for a volleyball tournament.

“She came in and found her car with rock all over the place, and somebody with the parking garage was waiting for her to show up,” Korn said.

Within two hours of entering the garage, part of the ceiling fell on it. 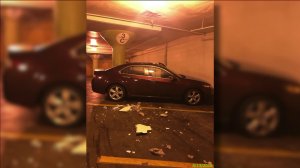 “Somebody would let you park in the parking garage that had the ceiling falling down on it. If someone had been in the car, it would have hurt somebody,” Korn said.

Plans are in the works for an overhaul of the garage and Barney Allis Plaza above. It’s a $63 million dollar project.

In the meantime, Korn wonders if the structure is safe.

“If somebody had been in the car it could have been dangerous. So, just knowing that if there are issues that somebody`s taking some precaution for safety,” Korn said.

“Now we’re incurring all this cost, and all this stuff out of the day to take care of all this stuff, and all we did is park is park in the parking garage to do some fun stuff in Kansas City,” Korn said.

FOX4 spoke to the manager of the garage with Towne Park. He wouldn’t confirm what happened and hasn’t committed to pay for the damage.

“They also said you could go get a rental car, but I told my fiancé, it’s like get something in writing that they’re paying for this. We’ve got to pay for all that,” Korn said.

The garage is managed by Towne Park but owned by the city.

Korn is hoping they will make it right.

A representative with the city said they are aware of the situation and are working to inspect and repair the ceiling of the garage. They are also working on the claims process with the owner.

The area is currently blocked off so people can’t park there.