KANSAS CITY, Mo. — There’s one black gun owner group that’s reportedly growing faster than any in the nation, and it happens to have chapters on both sides of the state line.

“This organization is about law-abiding citizens practicing their 2nd Amendment rights,” Sanders said.

The KCMO chapter has more than 25 members, but there are close to 30,000 members nationally with chapters in 30 states.

“It’s growing every month,” Sanders said. “We have a large group that’s coming into the organization, and 60-70% are women now.”

The group mostly focuses on gun safety, education and training. The instructors, like Sanders, are certified in concealed carry. Some members also belong to the National Rifle Association (NRA). 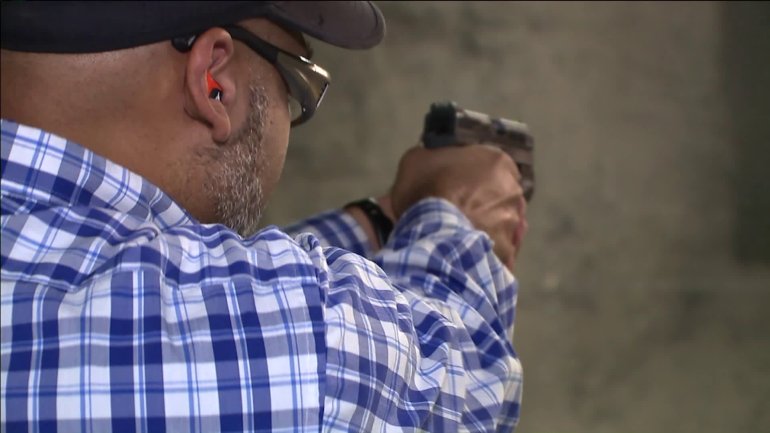 “A lot of times you have these mishaps because people aren’t well educated or informed and they don’t understand what safety is,” Sanders explained.

Sanders first fell in “love” with guns when he joined the military at 21.

“They ended up giving me a M-14 and a Mossberg shotgun and 45-llama and had to literally break the weapons down completely and then put them back together blindfolded,” he said.

The 55-year-old recalled being the only black guy at the shooting range during some of his early interactions with firearms — an observation that wasn’t lost on him.

“At that time, I understood that I needed to reach out to the African American community so they can enjoy the same rights that soldiers fight for every day,” he said.

Roughly 4 in 10 Americans say they live in a gun-owning household, according to data collected by the Pew Research Center. When you consider race, 24% of gun owners are black, compared to 36% of white people and 15% of Hispanics.

“I always wanted a firearm since I was a youth,” he said.

Williamson has been a member NAAGA for a year. He joined so he could better learn how to handle firearms. He also appreciates that he gets to train in ways he wouldn’t be able to at a normal range.

“What I saw from NAAGA was an opportunity to be among other like-minded people that look like me,” he said.

The group practices shooting at a range in a cave underground on the KC’s far east side. They run through several drills like how to protect oneself during an active shooting, Stop the Bleed, situational awareness and deescalation.

“When you’re talking to people who have hands-on experience, you’re able to have a discussion versus just data from a book,” Williamson said.

Police stops are also a topic of a discussion. Sanders said one encounter the group often reenacts is the shooting of Philando Castile in 2016.

Castile was killed by a Minnesota cop after being pulled over for a broken taillight. The 32-year-old told the officer he was licensed to carry. The officer shot the Castile when he reached for his wallet.

“What we try to do is make everything safe,” Sanders said. “Make [the officer] feel safe because when [the officer’s] safe, we’re safe.”

A safe space for honest dialogue.

“You’re able to have that open conversation to the things that we deal with,” Williamson said.

While NAAGA is a predominately black organization, they welcome people from all races, religions, backgrounds and professions.

“The majority of our members are federal employees, engineers, law enforcement, firefighters and military,” Sanders explained.

Sanders said they simply want to show the community that there’s nothing negative about responsible gun ownership.

“It’s hard to overcome some of the images that have placed in people’s heads, but we’re working every day to change it,” he said.

You can learn more about joining the KCMO and KCK chapters of NAAGA by clicking here.