Mounting evidence continues to suggest eating too much red meat — such as bacon and hot dogs — is linked with health problems.

A new study finds that changes in your red-meat-eating habits can be tied to your risk of early death. An increase in red meat consumption of at least half a serving per day was linked with a 10% higher risk of early death in the study, published in the medical journal BMJ Wednesday.

Replacing red meat with other protein sources may help you live longer, the study found. 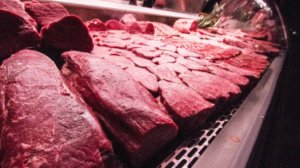 “The data suggest that replacing red meat with other protein sources, such as poultry, fish, nuts, legumes and whole grains and even vegetables, can reduce the risk of premature death,” said Dr. Frank Hu, professor of nutrition and epidemiology and chairman of the Department of Nutrition at the Harvard T.H. Chan School of Public Health, who was senior author of the study.

“What we found is that increasing the consumption of red meat is associated with higher mortality risk, and the risk is particularly high for people who increased their consumption of processed red meat,” he said.

‘This is where nutrition research gets exciting’

The data, which came from the Nurses’ Health Study and the Health Professionals Follow-up Study, tracked how much red meat and other foods each adult ate daily every four years using self-reported questionnaires, and then calculated change in eating habits over time.

Deaths from any cause in the data were confirmed using state records and the national death index, among other sources.

After analyzing the diet and death data, the researchers found within eight years, an increase of at least half a serving per day of processed and unprocessed red meat was associated with 13% and 9% higher risk of early death, respectively.

A decrease in eating red meats and an increase in eating whole grains, vegetables or other protein sources was associated with a lower risk of death over eight years, the researchers found.

“When people reduce their red meat consumption and eat other protein sources — and also plant-based foods — instead, they have lower risk of all-cause mortality and cardiovascular mortality,” Hu said.

The study provides “valuable and informative” data regarding the associations of red meat with poor health outcomes, said Dr. Heather Fields, an internal medicine specialist at Mayo Clinic in Arizona, who was not involved in the research.

“We’ve also seen that replacing red and processed meats with other protein sources has been associated with decreased risk of mortality in this study and in past studies,” Fields said.

“Keeping these findings in mind, we can now shift focus on which foods we can add to the diet to improve longevity and decrease risk of chronic diseases,” she said. “In addition, how can we prepare these foods to optimize nutrient intake while improving palatability and make healthy eating more enjoyable? This is where nutrition research gets exciting.”

Shalene McNeill, executive director of human nutrition research for the National Cattlemen’s Beef Association, noted the data in the study is more than 20 years old and said it might not be representative of eating habits today. “Beef’s high-quality protein, iron, and zinc strengthen a balanced diet and complement the nutrients found in plant foods.”

The study had some limitations, including that the dietary data was self-reported and the participants were mainly registered nurses and health professionals. More research is needed to determine whether similar findings would emerge among a more diverse group of people.

The study also pointed to an association between increasing eating red meat and subsequent mortality risk, but did not necessarily find causality. More research is needed to determine a causal relationship.

However, Hu said previous research has shown that higher amounts of saturated fat, heme iron, preservatives and other components in meat may contribute to adverse health outcomes.

Separate studies have also linked red meat to unfavorable changes in the gut microbiome, which is the ecosystem of bacteria and microbes in your gut.

Turning a spotlight on red meat

“The lower or lack of association between red meat intake and mortality in other countries or areas of the world indicates that red meat may contribute to mortality in the United States by providing a high protein content but also because it may contain other factors that contribute to damage,” said Valter Longo, a professor of biological sciences at the University of Southern California and director of the USC Longevity Institute, who was not involved in the study.

He went on to question the concentration of hormones or antibiotics in red meat in the United States compared with other countries, such as Japan or those in Europe.

“The reduced mortality when red meat is replaced with fish is consistent with this possibility since they contain generally similar levels of proteins,” he said, suggesting the content of red meat in the United States might be a factor driving the mortality link.