LEAVENWORTH, Kan. — Leavenworth County prosecutors have filed charges Tuesday against the suspect involved in a chase with the Kansas Highway Patrol that lead to a deadly crash near Bonner Springs.

The crash was reported just after 4 p.m. Monday on Interstate 70 near 182nd Street or mile marker 217.6, a few miles west of Bonner Springs, according to the Kansas Highway Patrol.

Leavenworth County Attorney Todd Thompson said, “Our thoughts and prayers do go out to the family and friends of the loved one they lost.”

According to a gofundme page for Pena, he was driving to Colorado to visit a friend who was there attending college.

Dorsey was taken into custody and reported to have minor injuries.

Dorsey will appear in court later this week. 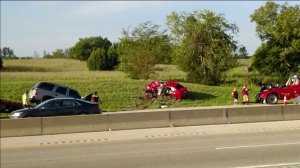