KANSAS CITY, Mo. — The Missouri Department of Conservation and cooperating agencies in three Missouri counties have filed charges in eight cases of walnut timber theft from public lands. The multiple investigations led to felony and misdemeanor charges against eight suspects.

Phoenix Vankirk, 25, and 20-year-old Kyle Holden, both from Holden, Missouri have been charged with felony property damage.

Charges have also been filed in St. Clair County.

In total 14 counts of stealing, three counts of property damage, three counts of receiving stolen property, and one count of possession of a controlled substance. Eight misdemeanor charges have also been filed.

Most of the public land thefts were from MDC conservation areas and U.S. Army Corps of Engineers land. There were also thefts reported on private land that included property owned by The Nature Conservancy.

According to Protection District Supervisor Joni Bledsoe, the overall saw log value of the stolen walnut trees was $61,804.

The investigation began in early 2018 and has involved dozens of MDC personnel including 20 Conservation Agents, along with staff from the Forestry, Wildlife and Resource Science Divisions.  MDC was also assisted by the Benton, Cedar, Henry, St. Clair and Vernon counties. Eldorado Springs Police and rangers from the U.S. Army Corps of Engineers also assisted with the investigation.

The MDC and other agencies continue to investigate additional timber thefts in Vernon County, Missouri and on Corps of Engineers property around Truman Lake.

“Cooperation has been the name of the game since the walnut theft investigations started,” Bledsoe said. “The teamwork has been outstanding.”

“The amount of timber thefts have skyrocketed in the last couple of years and the theft of timber is replacing copper and scrap metal thefts.  Bledsoe said.  “Timber theft is also on the increase in Arkansas and Nebraska.

If you notice any suspicious activity you can call Operation Game Thief at 800-392-1111 or contact your local conservation agent. 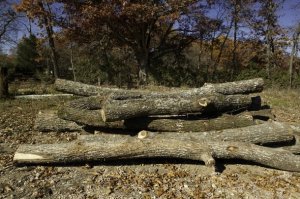