SPRINGFIELD, Mo. — A Chiefs fan couldn’t believe his luck when a friend offered him tickets to Sunday’s game against the Houston Texans. He said his day just kept getting better when he ended up in the middle of a now viral touchdown celebration.

“The first quarter was nothing but a — it was a bunch of errors. I mean that wasn’t our Kansas City Chiefs,” he said.

After erasing a 24-point deficit, the team started pouring it on. Up 10 points in the 4th quarter, Kansas City added another score with a touchdown pass from Patrick Mahomes to Blake Bell.

That’s when Bell jumped into the stands to celebrate with Chiefs Kingdom. Childers was caught on camera in a viral photo, catching Bell and celebrating with him. It was the same celebration where, to the delight of Chiefs fans everywhere, Eric Fisher stole a fan’s beers and poured them on himself. 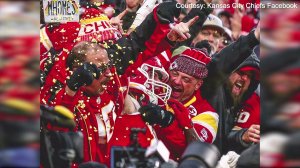 “You see that happen on TV with other people, but you never think it’s going to be the opportunity that you get to have a player score and jump up in the stands,” he said.

Childers said he was taking a picture of the play when the action came to him.

“I snap the picture. I thought, ‘Oh my gosh, he’s coming right at us.’ So I put my phone down, and he’s getting closer, and that’s when it all happened,” Childers said.

He said for special moments like this, you just have to be in the right place at the right time.

Marilane Carter, a mother of three and church pastor’s wife, hasn’t been seen in nearly a week. Her family told police investigators they last saw her as she set out driving her 2011 GMC crossover from Johnson County, Kansas to Birmingham, Alabama.

Schools are reopening, amusement parks are welcoming back visitors, and outdoor dining is the new way to eat out. But despite the signs that life is returning back to normal, the coronavirus pandemic has gone nowhere.

That's why a group of researchers at Duke University created a simple technique to analyze the effectiveness of various types of masks which have become a critical component in stopping the spread of the virus.