CLINTON, Mo. -- A four-month-old baby girl named Riley was found dead Sunday night, and the child's father was arrested after he told police he fell asleep on the couch and when he woke up, Riley was underneath him, not breathing.

Police and paramedics were called to the area of N. Seventh Street and E. Franklin Street at about 9:30 p.m. Sunday on reports that an infant had stopped breathing. The baby's uncle had dropped by for a visit and found the father, Richard McNabb, 32,  asleep on the couch.

"He did actually get up and then he went back and laid back down on the couch again and that's when they were able to see the baby was unresponsive," said Lt. Sonny Lynch, Clinton Police Dept.

Emergency personnel tried to revive her, but it was too late. 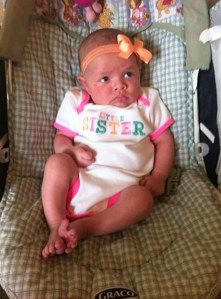 FOX 4's Shannon O'Brien spoke to Riley's grandparents, and they say they support McNabb and say he is a good father.

FOX 4's O'Brien asked police what McNabb said to them about what happened.

"Just that he is not a murderer. That's what he said to us and that's about it really," Lt. Sonny Lynch said.

Police say the father appeared intoxicated from alcohol and possibly another substance. They took him into custody to collect samples of his blood and breath, but he refused to give them voluntarily, and authorities eventually received a warrant to take blood.

McNabb was placed on a 24-hour hold at the Henry County Detention Center, and Monday afternoon, he was charged in Henry County with child neglect and 2nd degree murder.

Police obtained a search warrant and found marijuana at McNabb's home. Bond was set at $100,000.

Another two-year-old child was reportedly in the home at the time. The children's mother was at work when this happened.

Can sleep problems lead to the most common form of dementia?

Scientists have long suspected a link between obstructive sleep apnea and the disease that robs patients of memory: Alzheimer’s.

NASHVILLE, Tenn. (NewsNation Now) —  Both the Tennessee Titans and the Minnesota Vikings have suspended all in-person club activities after players and personnel tested positive for coronavirus.

Three players and five personnel tested positive for coronavirus on the Titans, the NFL confirmed in a statement. The Vikings said in a statement Tuesday that so far they have had no positive tests. The Titans and Vikings played each other on Sunday.

HOLDEN, Mo. -- A woman is dead and her husband has been charged after a shooting in Holden, Missouri, according to the Johnson County, Missouri Sheriff's Office.

Daniel Page, 30, of Holden, is charged with second-degree murder, endangering the welfare of a child creating substantial risk, voluntary manslaughter and a slew of weapon-related charges.