TOWANDA, Kan. – What do you get when a church opens a coffee house?

But it’s more than a cute name.

“Me and God, we’ve had our problems before,” said employee, DJ McGinn. “I’ve always believed in him. I just kind of stepped away from him for awhile, but now I’m trying to get him back in my life.”

The new restaurant in Butler County is helping recovering addicts and parolees, like DJ, start a new life.

“I got hooked on drugs when I was about 15,” said Evan Kingcade, who moved to Towanda from Oklahoma.

The two men are learning the culinary arts– prepping, cooking and baking– plus, the most important job skill, being dependable.

“Some of them have trouble with that, when they first come,” said Tamara Worcester, lead cook at HeBrews. “Even three hours of work is too much for ’em, and so once they get that work ethic, they can go work anywhere.” 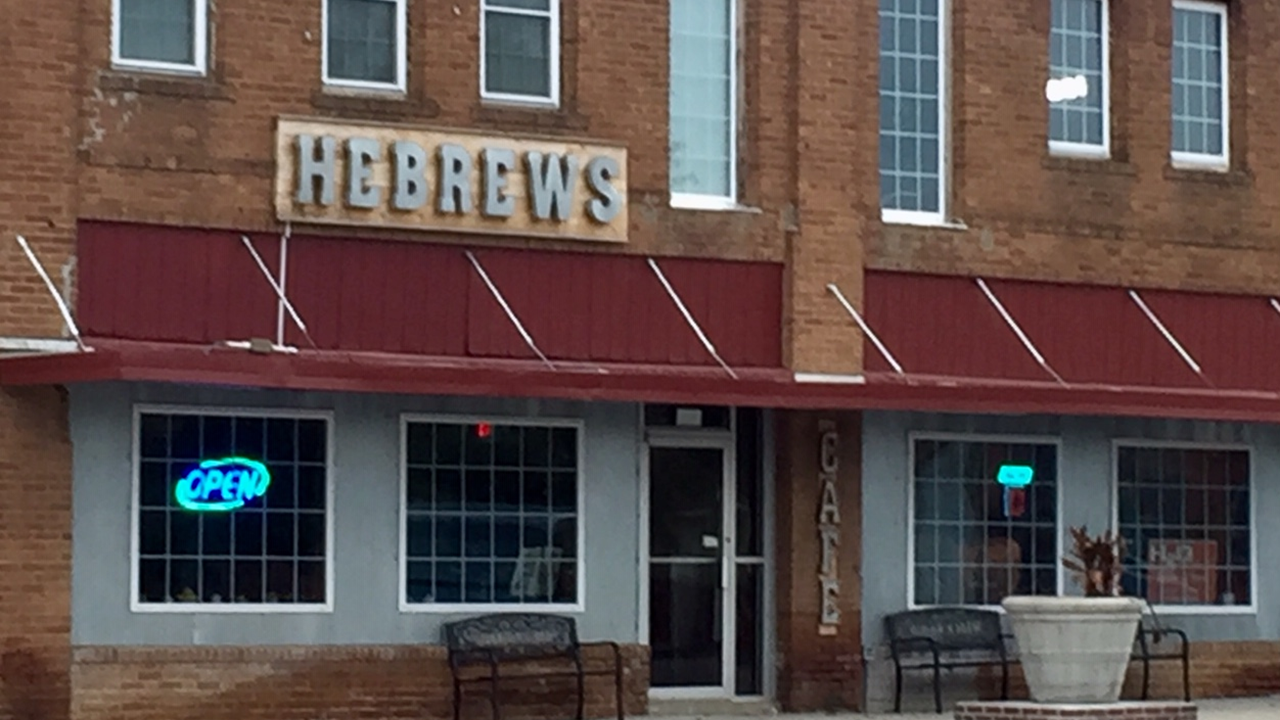 The “Transformed” rehab program is part of the H2O church, which spent years renovating the vacant building.

The men in recovery earn a paycheck for their work and live in an upstairs apartment– for free.

“The goal is to get them back out into society and hopefully living the life they really want to live,” said Doug Lauxman, campus pastor.

But even in a safe environment like HeBrews, staying clean can be tough.

“We had one or two come in,” said Lauxman. “They didn’t make it more than a week or so.”

Kingcade was their first student and is now earning his G.E.D.

McGinn started a couple months ago, and already, the giant cinnamon rolls he makes are often a sell-out.

“I made 20 last night, and when I got in this morning, they said, ‘Where are all the cinnamon rolls?’” said McGinn. “One guy bought 19 of them!”

People who live in Towanda are happy to see another business on Main Street. HeBrews is the town’s third restaurant.

Someday, the church hopes to expand the rehab program to house women, too.

“It only takes one life to change the world,” said Lauxman. “You never know where they’re going to go or where they’ll end up. As long as there’s one, we’ll keep working.”

OVERLAND PARK, Kan. -- A local business and non-profit are teaming up to take down. hunger during the coronavirus pandemic. The idea is also to help keep small businesses open and people employed.

Todd Johns, owner of Plowboys Barbecue, had a full freezer, but an empty feeling when the effects of COVID-19 kicked in.

RAYTOWN, Mo. – The Raytown School District learned on Sunday that a food service worker involved in preparing meals at Raytown Middle School on March 23, 2020 tested presumptive positive for contracting COVID-19 and has sought out medical treatment.  The patient was not present when meals were served on March 24th.

At this time the district is not aware of anyone else who works in the district or received a meal from Raytown Middle testing positive or showing symptoms of COVID-19.  All staff members were checked by district nurses prior to preparing and serving meals.

PAOLA, Ks. -- The state of Kansas goes into a mandatory stay at home order a midnight Monday morning.  It will become the 23rd state to order all its residents to stay home, and to only go out for essential reasons.  Governor Laura Kelly said she did it because the piecemeal implementation across the state was leading to chaos – and ultimately failure.

Kansas City and its surrounding counties have already been under one for several days.  But the areas surrounding the metropolitan area could give us a clue as to how rural places, like in western or southeast Kansas, will look under a Stay at Home order.