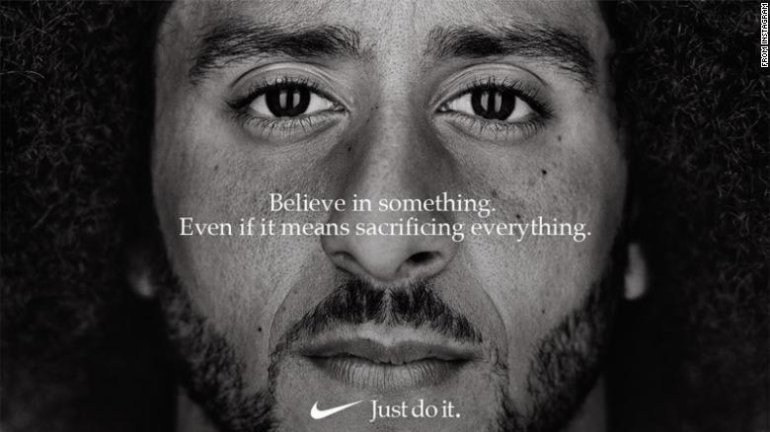 The College of the Ozarks, a private Christian school in Point Lookout, Missouri, that competes in sports at the NAIA level, said it will remove all uniforms purchased from Nike that contain the brand’s logo.

The ad featuring Kaepernick’s face says, “Believe in something, even if it means sacrificing everything. #JustDoIt.”

Last year, the college added a stipulation to competition contracts, saying it would walk away from any game where the opposing team takes a knee, sits or turns its back on the flag or anthem.

“If Nike is ashamed of America, we are ashamed of them,” College of the Ozarks President Jerry C. Davis said in a statement. “We also believe that those who know what sacrifice is all about are more likely to be wearing a military uniform than an athletic uniform.”

Kaepernick already had a deal with Nike that was set to expire, but it was renegotiated into a multi-year deal to make him one of the faces of Nike’s 30th anniversary “Just Do It” campaign.

TAMPA, Fla. -- Deputies arrested a Florida woman accused of a fraudulent return scheme involving dozens of Amazon accounts and thousands of returned items, according to the Hillsborough County Sheriff's Office.

From March 2015 until August 2020, investigators said Hoai Tibma, 32, operated a scheme in which she reused prepaid shipping labels generated for canceled orders, and then applied them on other returns.

KANSAS CITY, Kan. -- The suspect believed to be involved in a kidnapping in Kansas City, Kansas Sunday morning has been apprehended, according to police.