The historic grounds are now protected by the federal government. On Tuesday, dozens joined as Wyandotte County leaders posted signs at the ruins to mark its new status.

President Donald Trump established Quindaro as a national commemorative site when he signed the Conservation Management and Recreation Act into law last month. 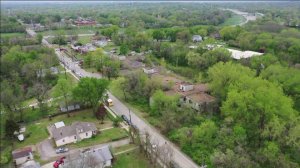 “Our next phase is national historic landmark,” said Marvin Robinson, a Quindaro ruins researcher, “and the national monument, a national park.”

Abolitionists founded Quindaro in the 1850s. It became a route for slaves to escape Missouri, a stop on the Underground Railroad and helped prevent slavery from spreading further west.

“Our work is not really for the people living and breathing today but for American citizens of the future, who have yet not been born,” Robinson said. “So they can understand how difficult it was for this great country to come into being as the United States of America.”

Quindaro was later abandoned as a settlement, but rediscovered during an archaeological excavation in the 1980s.

Now, the Quindaro Underground Railroad Museum houses artifacts from the town site, which are part of the Freedom’s Frontier National Heritage Area.

“We feel now with the federal designation that there will be a building in a park-like environment to bring many people here, who are coming now, but not in organized fashion, to see the beauty of a diverse community that existed before Kansas was a state,” said Sen. David Haley, a Democrat from Kansas City, Kansas.

Plans call for trails and walkways that would allow visitors to have magnificent views of the bluff overlooking the Missouri River.

Tyrann Mathieu Foundation is teaming up with Harvester today, Sept. 22, to give away meals to 320 low-income families, a nod to his jersey number 32. Those families all pre-registered and have been picked beforehand.