KANSAS CITY, Mo. — There was a suitable celebration amid the metro’s observance of Memorial Day.

It`s always a sacred time when thankful Kansas Citians gather to thank their military heroes. However, this year’s gathering was unique. This year’s guests of honor included the crew of the forthcoming USS Kansas City, a U.S. Navy vessel that`s due to be commissioned next year.

“Dear Lord, hear our prayer for all who have died,” one speaker at Monday’s ceremony said in a prayer for mercy for suffering families.

Within those solemn seconds, there was reserved excitement concerning the USS Kansas City, a new breed of Navy warship capable of traveling at high rates of speed while still transporting personnel and equipment.

Hodge, a Leavenworth native, is expected to be the only member of the big ship’s crew with ties to the Kansas City metro.

“It’s kind of like playing a video game. I really enjoy that. Driving it is fun. It goes 45 knots, which is much faster than most of our other ships,” Hodge said.

He said his family has over 200 years experience serving in the U.S. military. Hodge mentioned five close relatives, all of who have served, and been fortunate enough to return home after their service ended.

“When you’re out in the middle of the ocean, and you don’t have your brothers and sisters, you have who’s standing next to you. To lose one of those, it’s like losing one of your family members.”

The Navy expects to take delivery on the big boat next year. It’s the second military vessel named in honor of Kansas City. Hodge said he’s been helping his fellow crew members get acquainted with the city, since most of them have never visited the metro. 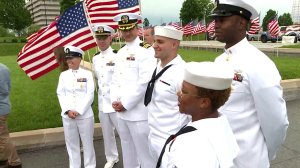 “The city has been very receptive,” said Cdr. Travis Dvorak, the USS Kansas City’s executive officer. “For us, to be part of a crew with a namesake city is wonderful. We want to belong to something, and we want the ship to belong to the city. It’s perfect.”

The Liberty Memorial and the National World War One Museum hosted Monday’s ceremonies, as is customary every year in Kansas City. Dr. Matthew Naylor, the museum’s executive director, said having the USS Kansas City’s crew on hand added to the special nature of Monday’s gathering.

“What an honor for Kansas City to be involved in having such an important ship being named after it and being added to the Navy fleet,” Naylor told FOX4.

Hodge said it’s his honor to serve our nation and to share Kansas City with his unit of sailors. Taking his hometown’s name out to sea is an honor he can barely measure.

The World War One Museum also announced plans for a forthcoming exhibit based on the Vietnam War, and how World War One’s events played into the southeast Asian conflict.

SUNRISE BEACH, Mo. -- A crash at the Lake of the Ozarks over the July 4th holiday has left a Kansas City infant dead.

KANSAS CITY, Mo. -- A man was found dead at the bottom of a pool the night before the 4th of July, police said.

Officers were called to a dead body at 8:38 p.m. near 53rd and NE White Avenue. They found a man's body at the bottom of a pool in a backyard.

KANSAS CITY, Mo. -- A woman is dead and a man is in critical condition after they struck a utility pole while on an ATV on July 4.

Responders were called to 51st and San Rafael Drive at 3:26 p.m. on report of a collision. Investigators found out that the two people were traveling northbound on San Rafael when the vehicle left the roadway on a slight curve, striking the pole.

Not every dog year is equal to 7 human years, researchers now say