OLATHE, Kan. — When Johnson County hired David Judd five years ago, it didn’t realize it was getting a two-fer.

Judd, a custodian for the county corrections department, keeps the Juvenile Detention Center and the nearby Youth and Family Services Center in Olathe spotless. It’s a job he enjoys.

Judd spent a lot of time in hospitals as a young boy, time spent doodling and drawing. He continued in school, taking every art class he could, and eventually graduated from the Colorado Institute of Art.

But art alone didn’t pay the bills, so he worked in the printing industry and eventually landed his current job.

“I don’t want to be a starving artist,” he said with a smile.

He didn’t talk much about his hidden talent, but when a co-worker saw some drawings, she suggested he enter an ArtsKC Contest. He did, and he won, and his talent with a brush was no longer a secret.

“We felt like we hit the jackpot,” said Jodi Taylor, the supervisor who hired Judd. She admitted if “artist” was on his resume, “I missed it.”

And now with his talent well known, an idea was born: Why not have Judd brighten up the otherwise dreary and depressing confines of the juvenile jail and other facilities? 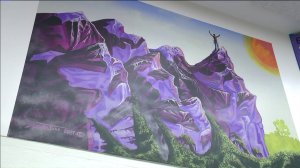 “Very concrete, very vanilla,” admitted Cathy Clark, a mental health clinician who works with the troubled youth who find themselves calling the juvenile jail home while they await their criminal cases to play out.

So Clark and others urged Judd to brighten things up. On his own time and with a stipend from the county, he went to work on various murals.

“What I say is keep climbing ‘cuz you don’t know where you’re going to end up,” the artist explained as he talked about the message he’s sending. 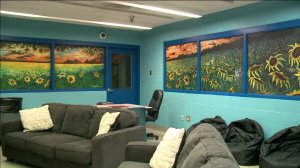 Other murals show pathways, getting over a hurdle (adversity), and beautiful sunflowers in a meeting room, representing his home state of Kansas, but also beauty.

“That is my favorite of all of them,” the humble artist said.

And the kids — they notice.

Clark said his color has prompted her “guests” to dabble in art. She said they talk about and admire their custodian’s work. 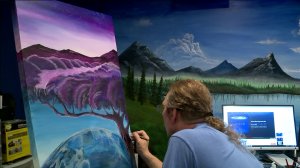 Judd hopes that translates into something more than just a pretty picture. That it’s a message: “Just see what I’ve done and maybe apply that to what they want to do.”

In other words, that they, too, can make something of their lives, even in their darkest moments.

“I’m hoping they see that and apply it to their own lives,” he said.

David Judd’s art can be seen at his Etsy site, “Juddwonderland.”