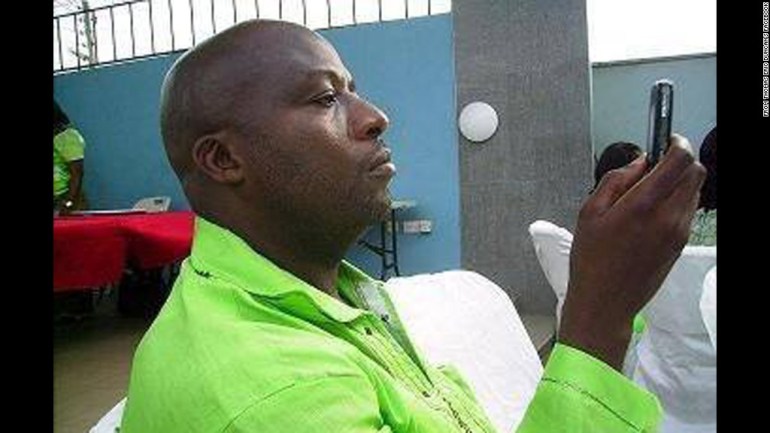 “It is with profound sadness and heartfelt disappointment that we must inform you of the death of Thomas Eric Duncan this morning at 7:51 am. Mr. Duncan succumbed to an insidious disease, Ebola. He fought courageously in this battle. Our professionals, the doctors and nurses in the unit, as well as the entire Texas Health Presbyterian Hospital Dallas community, are also grieving his passing. We have offered the family our support and condolences at this difficult time,” the Texas Health Resources statement said.

Duncan was listed in critical but stable condition on Tuesday. He had been given the experimental drug, brincidofovir, a broad-spectrum antiviral that has shown promise against Ebola in test tubes and is now being tested in animals, according to a statement from Texas Health Presbyterian Hospital.

Back in Liberia where he contracted the disease, nine of his neighbors have already died or were dying after coming into contact a young pregnant woman who carried the virus unknowingly.

Airports in the United States will begin taking the temperatures of arriving passengers who have flight itineraries originating from West African countries where Ebola is concentrated, according to a federal official with direct knowledge of the screenings.

The screenings will begin this weekend or next week, the source said.

Among the countries considered to be in the so-called Ebola zone are Guinea, Sierra Leone, Liberia and Nigeria.

The new measures at U.S. airports come a day after Dr. Thomas Frieden, the director of the U.S. Centers for Disease Control and Prevention, told reporters that devising travel guidelines was in the works but nothing had yet been finalized enough to announce.

The Ebola virus can spread through contact with bodily fluids — blood, sweat, feces, vomit, semen and saliva — and only by someone who is showing symptoms, according to the CDC.

People with Ebola may not be symptomatic for up to 21 days.

Symptoms generally occur abruptly eight to 10 days after infection, though that period can range from two to 21 days, health officials say.

Thomas Eric Duncan was the first Ebola patient diagnosed in the U.S. He was screened for the virus before flying from Liberia to the United States on September 19, but he didn’t show symptoms until he was in Dallas for several days.

People the CDC has identified as having contact with Duncan are being closely monitored and their temperatures taken twice a day. On Tuesday, Frieden said that none of them have shown symptoms.

But air travelers must keep in mind that Ebola is not transmitted through the air, said Dr. Marty Cetron, director of the CDC’s Division of Global Migration and Quarantine.

“There needs to be direct contact frequently with body fluids or blood,” he stressed.

Meanwhile, Frederic Vincent, a spokesman for the European Commission, told CNN on Wednesday that there have been eight confirmed cases of Ebola in European countries. There is one case in the United Kingdom that has been treated and the person has recovered; one case in France like that; two cases in Germany in which patients are receiving treatment; and three cases in Spain: two deceased Spanish missionaries and a nurse’s assistant who is being treated.

There is also a case in which a Norwegian staffer with Doctors Without Borders is being treated, he said.

Also in Spain, health officials said four more potential Ebola cases — in addition to the nurse’s assistant — are under observation.

The globe’s largest outbreak of Ebola has killed more than 3,400 people in Guinea, Liberia and Sierra Leone. Since March, more than 7,400 people have contracted Ebola in those nations, according to the World Health Organization.

The CDC is tracking the latest cases in the region.

Corcoran said someone acting as her assistant sent an invoice to her bookkeeper earlier this week for a renovation payment. She told People that she had "no reason to be suspicious" about the email because she invests in real estate, so the bookkeeper wired $388,700 to the email address.

JEFFERSON CITY, Mo. — Civil rights advocates filed a lawsuit to end Missouri's use of public defender “wait lists,” a practice they contend deprives thousands of people of their right to court-appointed counsel.

A petition filed Wednesday in the Circuit Court of Cole County seeks a court order forcing Missouri to immediately stop the practice by either appointing counsel or dropping charges against criminal defendants who have not been provided a defense attorney.

HARRISONVILLE, Mo. — A judge has approved a settlement involving a former Missouri high school coach accused of having an inappropriate sexual relationship with a student while the coach's father was the superintendent of the school district. FOX4 confirmed reports that the settlement amount was not disclosed during the hearing Wednesday afternoon in Cass County Circuit Court. RELATED: Lawsuit filed against Harrisonville School District, former coach over alleged sexual misconduct…