It happened on North Mill Street near Central Avenue in Kansas City, Kansas, around 4:30 a.m.

"I don't know if they burned the house down to erase evidence, but my niece, nephew and sister-in-law didn't deserve this," Ana Rodriguez said.

Family members tell FOX4 the victims are a 31-year-old mother of four, along with her 14-year-old daughter and 10-year-old son. 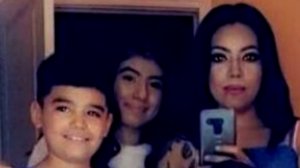 KCK firefighters working near Mill Street and Central Avenue saw smoke coming from the attic of a house. Inside, they found the woman and two children.

"You don't expect to wake up to stuff like this. It's pretty sad," neighbor Nichole Varela said.

"Never in my life thought she wasn't answering me because she was gone," Rodriguez said.

Ana said Yazmin Rodriguez was a hard-working single mom. Her two youngest children are spending the holidays with their dad. Yazmin, along with her 14-year-old daughter Amerikha and 10-year-old son Jeancarlos, were all killed, then their home burned.

"They were so loving. They were the happiest kids ever. I don't why anybody would want to hurt them," Ana Rodriguez said.

Ana and her siblings are now desperate to get their brother, who is father of the children who died, back to KCK from Mexico.

"I'm trying to get whatever I can so he can come say goodbye to his kids," Rodriguez said.

The family and investigators are now searching for clues about who killed the mother and children and how the fire started.

"I want justice. If anybody saw anything, anybody going inside the house, speak up. Let anybody know," Rodriguez said.

Police have been talking with neighbors and looking for possible security video of anyone who might've been in the area around the time of the fire.

There is a Go Fund Me page set up to help the family.

‘The fear is palpable’: Local nursing homes don’t have enough masks, gear to keep everyone safe

With schools closed, many Kansas livingrooms being transformed into classrooms

OLATHE, Kan. — It’s back to school for students in the Sunflower State. Monday marked the beginning of statewide e-learning as educators in Kansas took their students online. Public school buildings are closed, and have remained as such since March 17 when Governor Laura Kelly ordered them closed as a precaution to stop the spread of the coronavirus COVID-19. Since then, educators have worked to retro-fit their lesson plans to…

The US Food and Drug Administration (FDA) has issued an emergency use authorization for chloroquine and hydroxychloroquine to treat patients hospitalized with COVID-19.

The drugs -- which are used to treat malaria and other conditions -- have been called game changers by President Donald Trump.

WASHINGTON -- The Justice Department has started to probe a series of stock transactions made by lawmakers ahead of the sharp market downturn stemming from the spread of coronavirus, according to two people familiar with the matter.

The inquiry, which is still in its early stages and being done in coordination with the Securities and Exchange Commission, has so far included outreach from the FBI to at least one lawmaker, Sen. Richard Burr, seeking information about the trades, according to one of the sources.

With schools closed, many Kansas livingrooms being transformed into classrooms

Minnesota trooper pulls over doctor for speeding, then gives her his N95 medical masks