INDEPENDENCE, Mo. —  It’s been a metro favorite for decades. Even President Truman was a repeat customer. 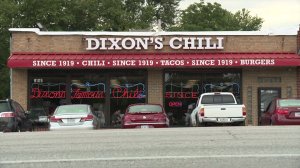 “We’re the oldest family-owned in Kansas City,” said Becky Porter of Dixon’s. “We’re a 100 years. Our celebration is August 10. That was the first day it opened. It was owned by Vern Dixon.”

The original Dixon’s was on Olive Street, but they’ve since moved to 40 Highway in Independence.

Despite the move, Porter said everything today is pretty much the same as it was back then.

“We do have tacos now they did not have. We offer ketchup now. They did not offer ketchup down on Olive Street. He thought it was an insult to put ketchup on the chili, and so it was not allowed in the restaurant,” she said.

But employee Melissa Thompson said back in the day people used to sneak ketchup in any way. 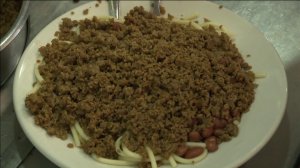 “Our chili is not like a tomato-based chili, so we cook the meat and beans separately, and we drain all the meat grease off the meat. So the meat grease becomes the juicy style, which is kinda like a meat broth,” Thompson said.

If you’re particular about your chili, Dixon’s can help with that.

“We kinda just have everything separate. So we just put it together upon their request. So if they just want it soupy, we can have it soupy, or if they want it completely dry, we wont add any of that to it.”

President Truman used to frequent Dixon’s, and that’s how it became Dixon’s “Famous” Chili. Photos of the 33rd President still adorn the walls. 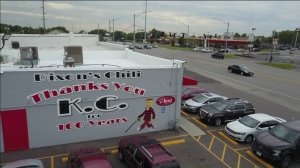 “When we were young, there were five of us kids. My dad used to bring us here for dinner, and the big thing was president Truman came here all of the time, and we always though we might see him,” Dixon’s regular Carolyn Bolon remembered.

“It’s been here forever and we’ve been coming here forever, and it just tastes great,” she said.

MANHATTAN, Kan. -- “Homegrown by heroes.” You’ll find a seal with that saying on just about every product at Golden Prairie Honey Farms.

"There's no greater enjoyment that you get out of something when you can see the end product, especially a frame of capped honey," retired army veteran Terrance Bork said.

PINELLAS COUNTY, Fla. -- "Baby on board" has a brand new meaning for one Florida family after a woman gave birth while celebrating the Fourth of July on the water.

John and Amber Easterday, along with their two children, took a pontoon boat out on Old Tampa Bay on Saturday, WFLA reported.

Pompeo suggested the possible move during an interview with Fox News' Laura Ingraham, adding that "we're taking this very seriously."