OVERLAND PARK, Kan. — An Overland Park family faces a dilemma after a dog they thought was friendly attacked their daughter and killed their Pomeranian.

The incident happened outside a home on West 153rd Street, but the dog and its owner live in Olathe. That’s complicating things.

Canady and her husband Sean were sitting outside of their Overland Park home when a familiar face walked by with his 3-year-old pit bull mix.

“What was most surprising is the dog was so docile and friendly at the beginning,” Sean Canady said. “We’ve had several encounters with him, and I didn’t expect that out of this particular dog.”

He said it’s like a light switch went off in the dog.

“I heard this blood-curdling scream. Like as a mom you just never get that out of your head,” Kristene Canady said.

Kristene said the pit bull mix pounced onto their 6-year-old daughter and then attacked the family’s 5-pound Pomeranian, Niko. 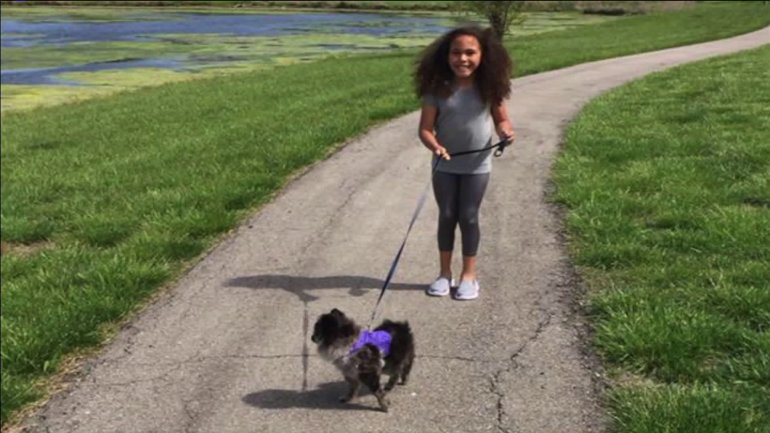 “As soon as he knocked her to the ground and Niko got loose, he latched onto Niko and just started doing the mauling shake,” she said. “I mean Niko couldn’t even yelp. It happened so fast.”

Niko died a short time later. Their daughter suffered scratches and bruises to her neck and chest.

The Overland Park mom said it wasn’t until after the attack they learned the dog had a history of violence.

The pit bull was taken away and is in quarantine in Olathe. The dog’s owner was cited for failure to confine, but the family hopes jurisdictional changes can be made so different cities can work more fluently when prosecuting a case such as this.

“If anything good comes from this awful situation is that could change to where it doesn’t matter if you live across the street and you happen to be in Olathe or something happens conversely,” she said. “Somehow that loophole needs to be fixed so that this other family doesn’t end up in the same quandary.”

In May, the pit bull will be in a dangerous/vicious dog hearing to determine its future.

LENEXA, Kan. -- People in Lenexa could soon have the option of having their recyclables picked up once every other week.

GLADSTONE, Mo. -- ReLeaf Resources in Grandview is one of about a dozen medical marijuana dispensaries in the Kansas City metro.

Statewide, there are 101 dispensaries authorized to sell medical marijuana. You can find an interactive map with all of the state’s dispensaries here.

Wyandotte County to keep current mask mandate, will discuss possible changes on May 27