KANSAS CITY, Mo. — A woman who previously served a night in jail for a city animal abuse citation now faces more serious charges. Kimberly Anderson, 36, was charged Wednesday with a felony count of animal abuse and a misdemeanor count of animal neglect or abandonment for allegedly torturing her Tibetan Spaniel, Roadrunner.

Court documents filed by the Jackson County Prosecutor’s Office allege that Anderson abused the dog on November 9. A witness told police that Anderson wrapped a leash around Roadrunner’s neck to pull him outside, and then picked Roadrunner up and slammed the dog on concrete before choking and kicking him. The witness said Anderson then went back to her apartment and left the dog outside. 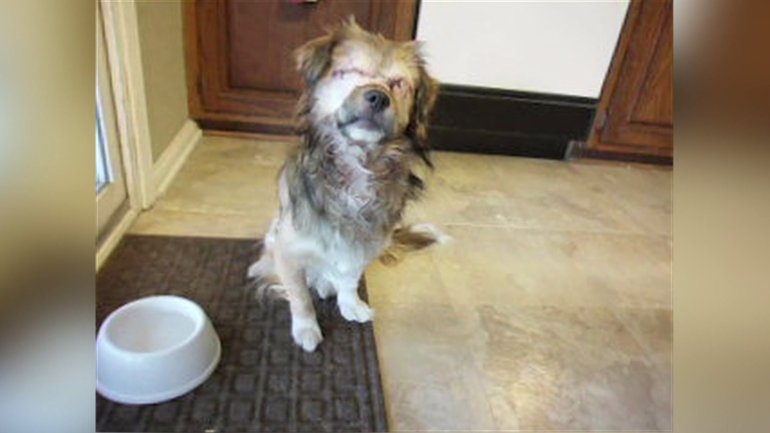 Police and animal control were called to an apartment complex in 1200 block on Independence Avenue on November 14 where Roadrunner was found and taken to the KC Pet Project and then BluePearl Veterinary Partners. Medical staff had to remove both of the dog’s eyes due to extensive injuries.

Anderson was arrested that day and denied abusing Roadrunner during her interview with police. She said her dog ran out of her apartment before she could catch him and said the dog was hit by a car.

She said she panicked and left the dog by the side of the road, neglecting to take the dog in for medical treatment. She also told police she avoided officers who came to the apartment complex on November 9 according to a probable cause statement.

After Anderson served one night in jail for the city citation, the next day she told FOX 4 she would never abuse any animal.

“People think that I abuse my animals, I don’t. I refuse to abuse animals,” she said.

She also said her neighbors lied to police. Fearing reprisal, Anderson said she didn’t want take Roadrunner back and believed he’d be better off in a different home.

The city previously said it would pursue further charges against Anderson past the city citation, but when the state stepped into prosecute, those charges were superseded.

“Acts of violence against a defenseless creature should be met with serious consequences,” prosecutor Jean Peters Baker stated in a news release.

Prosecutors requested Anderson’s bond to be set at $20,000 with special conditions, including the surrender of any animals she owns to animal control, and that she cannot have contact with any animals. If she’s convicted of the felony animal abuse count, she could serve between two and four years in the Missouri Department of Corrections or a special term not to exceed one year in Jackson County jail. She may also be fined $5,000 for the felony. If she’s convicted of the misdemeanor count, she could serve up to 15 days in county jail and/or pay a fine of $500.

A basketball court in Kansas City's Midtown neighborhood was dedicated for Ryan Stokes on Saturday. Stokes was a 24-year-old who was shot and killed by police in 2013.

Organizers, however, called the event not a protest, but a celebration of Stoke's life and passion.

The first severe weather chance happens tonight. Storms will fire up along and north of I-70 after 8 PM or so and slowly push north. Quarter-size to golf-ball-size hail will possible with the strongest storms as they dump heavy rain north of town. As that round moves away before sunrise tomorrow, be on the lookout for AM rain and rumbles through midday. The second (and stronger) round of severe weather comes after 2 PM tomorrow. A dynamic cold front will push through the metro around that time, bringing damaging wind, large hail, and tornado threats to areas east of I-35. Stay Weather Aware and have plenty of ways to receive severe weather alerts to your phone! Downloading our FOX 4 Weather App is great way to stay up-to-date throughout the weekend!

Last year because of COVID, many Halloween events and even some trunk-or-treats were canceled. But this year parents and families feel much more comfortable to get together and pass out candies.

The candy was flowing and many kids were decked out in costumes at the Vineyard Church KC East’s Trunk-or-Treat.

Alyssa Garcia attended this year and was thrilled this year's Halloween looks a little back to normal.

"We came along way from last year, last year it was just so crazy. I'm happy to be able to be out,” Garcia said.

The Vineyard Church KC East hosted its 3rd annual trunk-or-treat and more than 500 people filled the parking lot where there were more than 30-vehicles set up with candy stations.

“This year I think we are seeing people a lot more comfortable to get out and be in community with one another," Jennifer Reese, Vineyard Church KC East Executive Pastor.

And while the CDC approved of outdoor Halloween activities, it warns that families shouldn't let their guard down.

“I think people are trying to figure out how's the best way for their family to navigate it,” Reese said.

Currently the county is labeled as having substantial community risk.

However, the county has 64% of eligible people vaccinated.

1 dead, 7 injured in shooting at party in Fort Valley

After ‘Rust’ shooting, a look back at other fatal on-set accidents