She has an impressive resume in the classroom, a National Hispanic Merit Scholar, AP Scholar, and a Wendy Heisman Scholarship recipient.

You could call her the “queen of robotics.

The self proclaimed “Tom Boy” has a passion for sports and robotics.

In fact, her efforts on a project will save her local law enforcement office hundreds of thousands of dollars.

“I started a team in my basement, it was like Legos.” 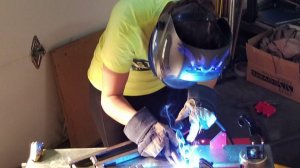 “I became a little bit obsessed in my basement trying to figure, ‘oh how can we make this one better? How can we do better on this?’ And it really captured my imagination.”

There were 140 teams who had managed to advance to the final level out of thousands and thousands of teams. Jaeza and her team, The Astromechs were given the challenge to build a robot that stacks cubes.

“We had this lifter that folded up with a single motor and it was spring powered so it folded up and we would load cubes on top of it, and then it would spring up.”

It certainly captured the attention of the judges. Jaeza and her team of 11 took home the innovative design award at the competition in Houston, Texas.
“When I have a project I’m working on I’m really focused on pushing to the finish line.”

Jaeza and her Oak Park High School’s robotics team are building a robot that will be a part of the department’s crisis negotiations team. 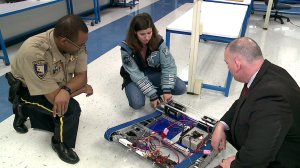 In fact, once fully operational, it will be used in hostage situations to get necessary items to those requesting them, without putting members of the force directly in harms way.

“We’re working on mounting an arm to open doors and things like that,” Jaeza said.

Major Erik Holland with the Platte County Sheriff’s Office said a robot of this caliber would typically cost in the six figures. But with the help of Jaeza and her robotics team, the price tag is right about $5,000.

Her efforts are being praised by folks around the world.

The Oak Park senior plans to become a biological systems engineer, saying she wants to make human life better through engineering. Clearly, she is well on her way.

If you know a young achiever who is 18 years old or younger and is doing exceptional things, FOX4 wants to hear from you. Nominate them here. 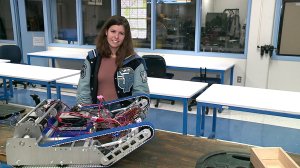 According to police, the man is identified as Harold Berry of Olathe, Kansas.