KANSAS CITY, Mo. — A video of an employee at a Northland restaurant stirring tea with her forearm is going viral, and those responsible have been fired.

The video was taken inside the Raising Cane’s on North Ambassador Drive in the Tiffany Springs neighborhood.

The video, which as of Wednesday evening had been viewed more than 285,000 times on Facebook, shows a female employee making tea with her arm fulling submerged. The employee and another girl are heard laughing before the employee poured the tea into a dispenser. 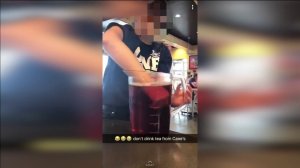 The caption on the video read, “don’t drink tea from Cane’s…she tryflin cause we don’t care no more.”

“To video yourself doing it says that it was very purposeful,” said Tatiana Camacho, whose daughters love to visit the restaurant chain. “It looks like they’re enjoying being gross.”

“It’s not sanitary and people could get really sick from that because they don’t know where her hands have been,” added Grant Martin, who used to work in the fast-food industry.

The restaurant chain was swift in condemning the actions. The president and COO of the company, AJ Kumaran, told FOX4’s Zac Summers he learned of the video late Tuesday night. The restaurant opened an investigation and quickly fired the employees responsible for the video.

“At Raising Cane’s, we take pride in what we do and work very hard to train our 19,000+ Crewmembers to uphold the highest standards, which our customers have come to expect from us. After reviewing the video of the isolated incident at the Tiffany Springs Restaurant, we are incredibly disappointed by the actions of these Crewmembers. We take the safety and quality of our food very seriously, and we will not tolerate any actions that compromise these standards. As soon as we were made aware of the incident, we took immediate action, including launching an investigation, terminating the Crewmembers and contacting local authorities to support their review of the incident. This is not who we are as a company, and we hold ourselves to a higher expectation. Moving forward, we will work to ensure additional training for all Crewmembers to reinforce how we expect our team to embody Cane’s values in everything we do.”

“I appreciate that he took action quickly and there weren’t any excuses because that was pretty inexcusable,” Camacho said about the company’s response.

Chiefs’ Mecole Hardman may not play in Super Bowl