BELTON, Mo. — Belton police and the Missouri State Highway Patrol have issued an endangered person advisory as they search for a missing 26-year-old woman.

Jessica Parsons was last seen June 17 when she left her Belton home on foot and supposedly went for a walk to Memorial Park in Belton. She last communicated with her family via text around 5:15 p.m. that day.

On Wednesday, Belton Police Lt. Travis George said investigators determined that Parsons took an Uber from her home around 12:45 p.m. Sunday to a Walmart in Raymore. She then later took that same Uber to the area of Main and Walnut streets in Belton. Officers are now searching that area.

George said officers have spoken to the Uber driver, who confirmed the information. Police have also released photos of the Uber vehicle and Parsons exiting the Walmart from surveillance footage. See the photos below.

Cell phone pings showed activity up to 10 p.m. that day, but nothing after that, police said.

Hear more about the search in the video above.

Parsons is described as 5-foot-2, about 130 pounds with brown hair and hazel eyes. Police said she has a birth mark on her right temple and a Native American symbol on her left shoulder. 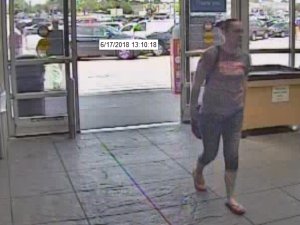 WASHINGTON — President Donald Trump on Tuesday called on Attorney General William Barr to immediately launch an investigation of Democrat Joe Biden and his son Hunter, effectively demanding that the Justice Department muddy his political opponent and abandon its historic resistance to getting involved in elections.

With just two weeks to go before Election Day, Trump for the first time explicitly called on Barr to investigate the Bidens and even pointed to the nearing Nov. 3 election as reason that Barr should not delay taking action.

NEW YORK — Transcripts of interviews lawyers conducted with the ex-girlfriend of the late convicted sex offender Jeffrey Epstein should be released as soon as possible, a judge ordered on Tuesday.

U.S. District Judge Loretta A. Preska said the transcripts of two days of depositions in 2016 of British socialite Ghislaine Maxwell and related documents along with the deposition transcript of an anonymous accuser should be released publicly as soon as is practicable.

MINNEAPOLIS — The U.S. Department of Justice announced Tuesday that it has put $3 million toward the creation of a national center that will provide training and assistance to help law enforcement agencies prevent the use of excessive force, and officials expressed hope that Minneapolis would be the first city to take advantage of the resource.

The announcement was made in Minneapolis, where the police department has been under pressure to reform since the May 25 death of George Floyd, which touched off mass demonstrations against police brutality around the nation.

Texas woman died of COVID-19 while on commercial flight