KANSAS CITY, Mo. — Imagine a songwriting duo that was so in tune with each other, they finish each other’s sentences. 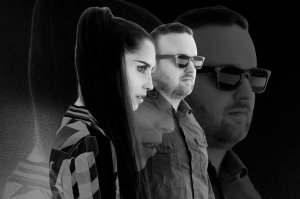 That is literally what the band Yes You Are is doing.

The husband-wife duo of Kianna Alarid and Jared White have been quietly invading the Kansas City music scene for the last several years, growing a fan base that can be calculated somewhere in thousands. What’s even more impressive then the size of their base is their ability to pick up where the other leaves off during songwriting, seamlessly creating these complicated-catchy concoctions of notes that are supported by deep thought and lyrical wizardry.

“It kind of comes in big spurts,” White said. “I’ve gotten attune to when things are coming, and when it’s coming, I’m writing constantly.

“You have to capture [it],” White continued. “That kind of inspiration is not a permanent thing. When it comes, I have to milk it for all it’s worth”

“If he gets to the place where he [says] you should do the bridge on this,” Alarid said while taking the lead. “Load it into your system which means I’ll record a demo of it… That’s how we’ve made most of our songs.”

You can hear more from the interview Yes You Are above, or wherever you get your podcasts.

Listen to more incredible musicians in other episodes of the Crazeology podcast.

Join the Crazeology Facebook page to keep up with the latest episodes and updates, and the FOX4 Podcast Facebook page, to keep in touch with all of our podcasts!

ROACH, Mo. -- One person was taken to the hospital after a boat caught on fire at Lake of the Ozarks.

The Missouri State Highway Patrol said the incident happened Saturday near a gas dock at the 17.5 mile marker.

DALLAS — The airline industry’s recovery from the pandemic passed a milestone as more than 2 million people streamed through U.S. airport security checkpoints on Friday for the first time since early March 2020.

The Transportation Security Administration announced Saturday that 2.03 million travelers were screened at airport checkpoints on Friday. It was the first time in 15 months that the number of security screenings has surpassed 2 million in a single day.

Own an Echo? Amazon may be helping itself to your bandwidth

Do you own an Amazon smart device? If so, odds are good that the company is already sharing your internet connection with your neighbors unless you've specifically told it not to.

On Tuesday, the company launched a program that forces users of many Echo smart speakers and Ring security cameras to automatically share a small portion of their home wireless bandwidth with neighbors. The only way to stop it is to turn it off yourself.

Congress looks towards legislative action to fight off cyber-attacks

Person living in home not hurt after fire levels home, they were next door delivering ham

Own an Echo? Amazon may be helping itself to your bandwidth