Tom Brady has a big announcement about his future… pic.twitter.com/0dD7XrnnHB

MIAMI, Fla. — The Kansas City Chiefs and the San Francisco 49ers are playing in the Super Bowl tonight. New England Patriots quarterback Tom Brady doesn’t want you to forget about him just yet.

The Patriots longtime quarterback and victor of multiple Super Bowl Championships sent out a black and white photo on Twitter of himself earlier this week. It teased for a commercial during the Super Bowl.

The ad was for Hulu in hopes of generating buzz and to help distinguish the service in a crowded streaming-video marketplace. Hulu has several big name series that have taken in awards including The Handmaid’s Tale, Castle Rock, and The Looming Tower. Some sporting events can also be found on Hulu. 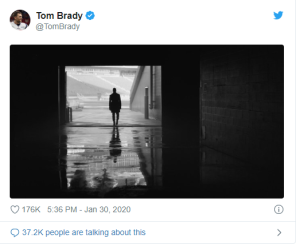 “I don’t want to say too much about it, but all the fans who are watching the game will figure it out pretty quickly,” Brady told Westwood One before the Super Bowl, via ESPN. “I was definitely having some fun. It will be revealed here shortly as you’re watching the game.”

Theories ran wild about what the black-and-white picture of the 42-year-old legend would mean. Some speculated it would announce his future — others thought it would be a tribute to Kobe Bryant. Fans will be happy to know it wasn’t a retirement message.

After 20 seasons with New England, Brady will be a free agent in March. Several teams have their eyes on Brady.

The Patriots got knocked out of the NFL playoffs in the AFC wild-card round, thanks to the Tennessee Titans. The Chargers, Raiders, and possibly the Buccaneers all want a piece of the Brady craze. He could still play for the Patriots when this is all said and done.

NFL Network has reported the Patriots are ready to pay Brady $30 million a year to keep him.