WARNER ROBINS, Ga. — A high school football player who takes cannabis oil to prevent his seizures has been ruled ineligible to play in college, a decision that has sparked outrage from advocates, lawmakers and sports fans.

A former Big Ten Coach of the Year sharply criticized the decision, saying “it’s not fair to the kid” and urging the NCAA to reconsider.

C.J. Harris, a standout strong safety, helped lead Warner Robins High School to the Georgia state championship game and committed to play for Auburn University next season. But he was recently notified by Auburn coaches that the NCAA will not allow him to play if he remains on cannabis oil, according to CNN affiliate WGXA.

Under NCAA guidelines, athletes are not permitted to have any tetrahydrocannabinol in their systems. Known as THC, it is one of the active ingredients in cannabis. It has some medical applications but is also psychoactive and can cause a “high.” The other active cannabis ingredient, cannabidiol or CBD, does not produce a high and is thought to offer wide-ranging health benefits, including against seizures.

The cannabis oil Harris takes for his seizures contains less than 0.3% THC, according to the label. He won’t be able to pass an NCAA drug test while on the medicine, WGXA reported.

“We urge the NCAA to review their existing guidelines on THC and explore possible exceptions to allow players under medical treatment, like C.J., the ability to fulfill their dreams of playing college football,” Phil Gattone, president and CEO of the Epilepsy Foundation, a nonprofit advocacy group, said in a statement. “We hope the NCAA would reconsider their decision and assess C.J. on his character and talent as a football player.” 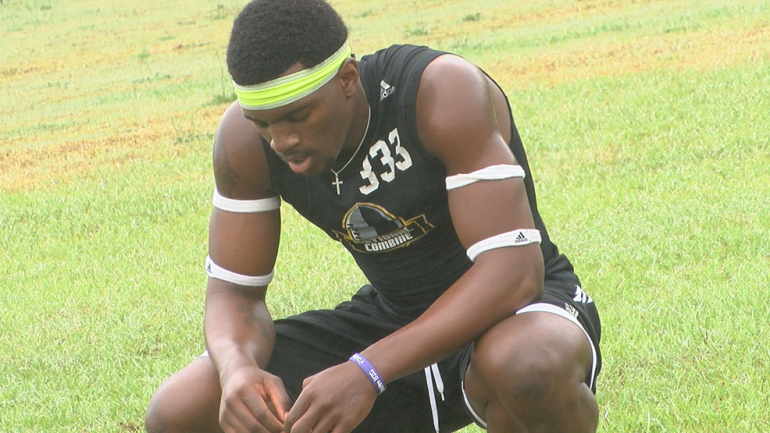 Gattone said that although he couldn’t comment specifically about Harris’ use of CBD oil to treat his seizures, the “Epilepsy Foundation is committed to advocating for people with epilepsy live their fullest lives and realize their dreams.”

“We support safe, legal access to medical cannabis and CBD if a patient and their health care team feel that the potential benefits of medical cannabis or CBD for uncontrolled epilepsy outweigh the risks,” he said.

The NCAA has not responded to a request for comment.

Jerry Kill, who was named Big Ten Coach of the Year as the head football coach of the University of Minnesota, even as he battled his own seizure disorder, has sharply critical of the decision. In a phone interview with CNN, he urged Auburn and the NCAA to come together to reconsider the decision.

“That young man should not be punished for a disorder that is being controlled by cannabis oil,” said Kill, who had to retire due to seizures and has been a champion for those with epilepsy. “I encourage both parties to take a good look at what they’re doing to a young man’s dream.

“If it’s not safe for him to play, that is one thing. But if it’s because he’s using CBD oil and they won’t let him play, that’s another. A kid should not be punished for his seizures being brought under control. It’s not fair to the kid.”

Harris was an eighth-grader when he suffered his first seizure. By his sophomore year in high school, he was having two or three seizures a month. Typical anti-seizure medications didn’t work, so his doctors eventually put him on cannabis oil. He has not had a seizure since he began taking it in January 2017, WGXA reported.

CBD is legal for people with seizure disorders in Georgia as well as in neighboring Alabama, where Auburn is located.

Harris planned to attend Auburn, his “dream school,” as a walk-on next season. “I saw everything lining up perfectly for me,” he told WGXA.

But that dream was shattered when he was notified by Auburn staff that the NCAA ruled him ineligible if he stayed on cannabis oil.

“You’re taking something away from a kid who worked so hard his whole life to get there, and you’re just taking it away because he’s taking a medication that’s helping him with a disability,” father Curtis Harris told WGXA.

Allen Peake, a state representative who has championed medical marijuana for children in Georgia, expressed outrage at the news of Harris’ ineligibility. “We must fix this,” he tweeted.

Heath Clark, a state representative from Warner Robins, had rejoiced at the state Capitol in February when Harris committed to Auburn, saying that the young man being seizure-free was a wonderful example of good news resulting from the legalization of medical marijuana.

“His dreams are being fulfilled. He has a future. He’s going to get a quality education at that school across the Georgia border,” Clark said at the time.

As news of Harris’ ineligibility spread Friday, Clark took to Twitter to bash the NCAA. “The NCAA needs to fix their outdated policies,” he wrote.

Others expressed a similar sentiment. Brandon Marcello, a senior writer for the website Auburn Undercover, tweeted that the “NCAA needs to do the right thing here.”

Harris had committed to Auburn in February, announcing to his Twitter followers that “God has afforded me a once in a lifetime opportunity that I could not pass up.” He told WGXA he is now looking at junior college programs or other schools not under NCAA guidelines.

He said he was speaking up for others with seizure disorders and standing in solidarity with them — to get the word out that there’s “no need for me to give up at anything I want to do in life.”

The issue is likely to come up more often as the US Food and Drug Administration considers approving an epilepsy drug that would be the first plant-derived cannabidiol medicine for prescription use in the United States.

The FDA will vote in late June on whether to approve the drug, Epidiolex, an oral solution, for the treatment of severe forms of epilepsy in a small group of patients. The FDA has approved synthetic versions of some cannabinoid chemicals found in the marijuana plant for other purposes, including cancer pain relief.

Already thinking about your spring lawn and garden …

Now is the perfect time to plan lawn and garden projects. Our DIY expert provides tips for getting your property ready for spring.

Best albums to blast at full volume for couples and …

As Valentine’s Day approaches, here are some of the best tunes to embrace any situation, whether it’s starry-eyed romance or empowering self-love.

Florida bill would ban driving in the left lane

Can a drugstore be your only doctor?

WHO updates list of meds to stockpile for emergencies

How Kelce’s mom plans to support both sons in playoffs